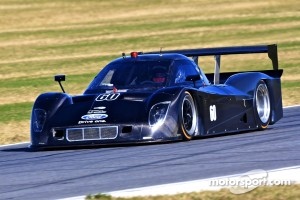 Another major player for the 2012 GRAND-AM Rolex Sports Car Series took to the stage for the first time Monday at Daytona International Speedway, as the Riley DPG3 took its first laps in preparation for the 50th Rolex 24 At Daytona. NASCAR regular AJ Allmendinger joined John Pew at the wheel of the No. 60 Michael Shank Racing Ford/Riley.

In addition, GAINSCO/Bob Stallings Racing had the first public test of its new No. 99 GAINSCO Auto Insurance Corvette Daytona Prototype. Two-time DP champs Alex Gurney and Jon Fogarty were joined by Memo Gidley, who was announced as the team’s third driver for the Rolex 24.

- Memo Gidley has competed in 74 Rolex Series races. He last raced a DP in 2010, finishing fifth for Doran Racing in the Brumos Porsche 250 at Daytona. Gidley won at Mexico City in 2005 with Michael McDowell for Finlay Motorsports. His five podium finishes include second at Watkins Glen’s August race in 2007. He co-drove with Max Angelelli and Wayne Taylor for SunTrust Racing, finishing behind new GAINSCO teammates Alex Gurney and Jon Fogarty.

- GAINSCO/Bob Stallings Racing owner Bob Stallings said that while five-time NASCAR Sprint Cup Series champion Jimmie Johnson will not be competing with the team in January’s Rolex 24 At Daytona, he may be part of the driver lineup for the inaugural race at Indianapolis Motor Speedway in July.

- Starworks Motorsport team owner Peter Baron and lead driver Ryan Dalziel stopped by to pick up their new Riley DPG3 chassis. The team expects to have the car completed for the Roar Before the Rolex 24 test on Jan. 6-8.

- The five Daytona Prototypes completed 267 trouble-free laps in the seven-hour session. All times were unofficial.

- Rick Ware competed in the 1984 Rolex 24 At Daytona, driving a Mazda RX-7 with Paul Lewis, Joe Varde and Scott Pruett – who also was making his Daytona debut. Ware, then 20, was “low man on the totem pole” and drove his first stint at night and in the rain – both personal firsts. Ware’s father – ex-Trans-Am racer John Ware – was first driver to shake down the team’s Porsche on Monday.

“This new car came out of the box pretty awesome. I’m impressed with both the reliability and speed. Given that this is only its second test, there is a lot of potential to make it even better. It’s awesome to see how far the Daytona Prototype has come since I first drove one with Brumos Racing in 2003, and how this new car really resembles the road car. I believe it is the future of the Daytona Prototype.” Max Papis, No. 9 Action Express Racing Corvette DP.

“My first impressions of the new car are really good. It definitely feels different, and we’re still getting used to the aerodynamic configuration. Everything so far has been very positive. We feel the new Corvette is as fast as it looks.” Alex Gurney, No. 99 GAINSCO Auto Insurance Corvette DP

“It’s a little bit different to drive, but it’s awesome. The guys did an excellent job getting it ready. We’re still learning the car, but it’s all good – and it looks beautiful, too. From the driver’s standpoint, our position is a little bit more in the center of the car, and I feel a little bit lower. It’s fine, but it just takes a little time to get used to.” John Pew, No. 60 Michael Shank Racing Ford/Riley

“This is my first time testing a sports car. I find road courses are a blast to drive – my best finish last year was 11th at Road America – they’re enjoyable and I feel there is so much more in the driver’s hands at the road courses.” Timmy Hill, 2011 NASCAR Nationwide Series Raybestos Rookie of the Year, No. 16 Rick Ware Racing Porsche GT3

“I told Michael Shank that we’ve been saving the last six years to win the big one – the 50th Rolex 24. That’s my excuse why we haven’t won it the last six years. After my first laps in the new DP, the new Riley is really smooth and easy to drive. It’s a nice car and it looks really cool. Overall, the test has been good.” AJ Allmendinger, No. 60 Michael Shank Racing Ford/Riley

“You’ve got to remember, our team has changed everything from last season – car, chassis and engine. The guys are still getting their arms around the car and getting to make it their own.” David Donohue, No. 5 Action Express Racing Corvette DP

“Since our last test, the team has done a lot of work improving the car and it’s a lot better. We’ve actually gotten to test some new things on the car today.” Ricky Taylor, No. 10 SunTrust Corvette DP

Coming Up: The next official activity for the Rolex Series will be the Roar Before the Rolex 24 test at Daytona International Speedway on Jan. 5-8. The 2012 Rolex Series opens with the Jan 28-29 50th Anniversary Rolex 24 At Daytona.