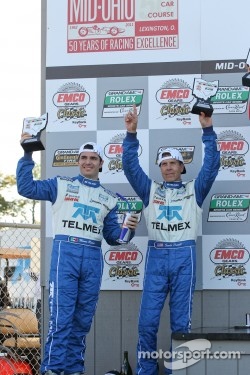 In other highlights, novelist Garth Stein presented awards to the top Pro-Am drivers, AC/DC lead singer Brian Johnson made a video presentation and racing legend Derek Bell read recorded excerpts from Stein’s “The Art of Racing in the Rain.”

On a concluding note, five-time winner Hurley Haywood introduced a video capturing the history of America’s premier endurance event in anticipation of January’s 50th anniversary running of the Rolex 24 At Daytona.

“I would like to congratulate Ganassi, BMW and TELMEX for another incredible achievement, as well as a special thanks to my teammate,” said Pruett, 51, who won his fourth DP title, while adding to his extensive Rolex collection that includes the top prizes for four overall victories in the Rolex 24 At Daytona. “This is a milestone – to not only achieve my fourth DP championship in the Rolex Series, but the 10th major championship in my career.”

“I like the sound of that – team championship,” Ganassi said. “I say this all the time – individuals win races but teams win championships.”

Davis and Keen celebrated Brumos Racing’s first season in GT competition after the team competed in Daytona Prototypes since 2003. The pair won two races, capturing the championship by two points over Autohaus Motorsports’ Bill Lester and Jordan Taylor, and by four points over third-place finishers Sylvain Tremblay and Jonathan Bomarito of SpeedSource. 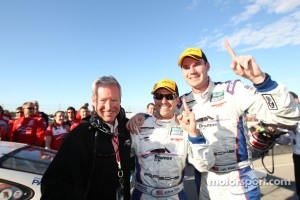 “Brumos is an extremely special team, and its legendary presence in motorsports is no surprise once you have become part of the family,” Davis said. “I’ve never seen a more passionate squad than our team this year.”

Henri Richard won the MESCO Building for the Future Rookie of the Year Award.

John Pew was presented with the Jim Trueman Award for the second straight year, while Wayne Nonnamaker won the Bob Akin Award. Completing the Pro-Am awards was the inaugural Young Guns competition, won by Burt Frisselle.

Ricky Taylor and Max Angelelli, drivers of the No. 10 SunTrust Chevrolet/Dallara, were recognized for finishing second in the DP championship, while David Donohue and Darren Law finished third.

The 2011 Continental Tire Horsepower Award, a season-long competition for teams to earn points for not only on-track performance but promotional and publicity activity to support the series, was also given. Michael Shank Racing won the top prize in the DP class, with the SpeedSource No. 70 Mazda team winning GT honors.

SPEED’s Leigh Diffey was master of ceremonies, with musical entertainment provided by Nik and Sam.

The next activity for the Rolex Series will be testing at Barber Motorsports Park on Oct. 17-18, with sessions at Daytona in November and December. The 2012 season officially gets underway with Jan. 5-8 "Roar Before the Rolex 24" Test Days at Daytona International Speedway, leading up to the 50th running of the Rolex 24 At Daytona, Jan. 28-29. The complete 2012 Rolex Series schedule will be announced in the near future.