The battles for supremacy in both the Grand-Am Rolex Sports Car Series Daytona Prototype (DP) and Grand Touring (GT) classes were tight contests on the 2.238 mile Mazda Raceway Laguna Seca road course near Monterey, California. Yet it was the pole winning DP team that held on to score their third win of the season. In GT, the 2012 championship was secured by the Ferrari team!

Great for Ferrari in their first year back in the series.

Antonio Garcia and Richard Westbrook in the Spirit of Daytona #90 Corvette handily won the race by a margin of 3.878 seconds. In the closing laps, the cushion that Garcia had earlier was being eaten away by a hard charging Jon Fogarty. The #99 GAINSCO/ Bob Stallings Racing Corvette team with Alex Gurney and Fogarty had to settle for second. Ryan Dalziel and Alex Tagliani brought the #8 Starworks Motorsport Ford Riley home in third.

“Great to be back in Laguna Seca and nice to be up on the podium,” said Garcia. “I knew Jon was behind me so I pushed as hard as possible. The Chevy car ran really good.”

Westbrook commented “What a fantastic day! It was hard to focus at the end with the battle between Antonio and the 99.”

Before the green flag was shown, Paul Tracy spun the Action Express Racing #5 Corvette, but the Canadian did save it and was able to continue. The team got lucky when an early full course caution was brought out when Tony Ave in the #87 GT Viper had to stop on track.

On lap 15, the field was back to green flag racing with the pole winner, Westbrook, was holding off Fogarty. Close behind the leaders at the end of 20 laps were Alex Popow, Ricky Taylor, Memo Rojas and Tracy. There was still a chunk of the two-hour and 45 minute racing action remaining in the penultimate round on the 2012 calendar.

One of the highlights came with Alex Gurney took over the Bob Stallings Racing Corvette. Per the team: “A fuel-filler cap stuck open during a pit stop”. The spray from the fuel was quite dramatic. Yet the team and the drivers did not panic as Gurney explained, “When I got in the car we had a little problem with the fuel, they said it was spilling out of the car, gushing out of the car I guess, so we had to come back in and reset it and fill it back up a little.”

Fogarty said, “The car was fantastic. The battle for overall would have been awesome.”

The GT battle was extremely close with positions changing in the final laps. Dane Cameron and Wayne Nonnamaker notched the win in their #43 Team Sahlen Mazda RX-8. “Wayne did an amazing job and the car was amazing,” said Cameron. Nonnamaker commented that “everything went perfect”.

Second place in the #69 Ferrari 458 were Jeff Segal and Emil Assentato. Not only did the pair take today’s victory but they also nailed down their championship; plus the team title for Team FXDD with Ferrari.

“Tough start for us this weekend, lots of different problems but we go to the sweet spot and I am thrilled to be on the podium,” said Assentato. “This is unbelievable.” His co-champion Segal said, "The car was excellent, and it was tense at the end with Andy (Lally). The championship has not hit me yet. Great for Ferrari in their first year back [in the series].”

After his second title in three years sunk in, Segal commented: “It’s a fantastic feeling to have set a goal at the beginning of the season to have worked very systematically toward achieving that goal. One race before the end of the season we accomplished what we set out to do, which was to win the championship with Ferrari in its return to the Rolex Series. There is still the manufacturers’ championship that we are fighting for at Lime Rock but a large part of the mission is accomplished.”

Placing third in the #44 Porsche GT3 were Andy Lally and John Potter for Magnus Racing. Lally pushed hard to take second out of the hands of Segal in the closing minutes. “Pretty wild day! And really a pretty wild last lap," said Lally. 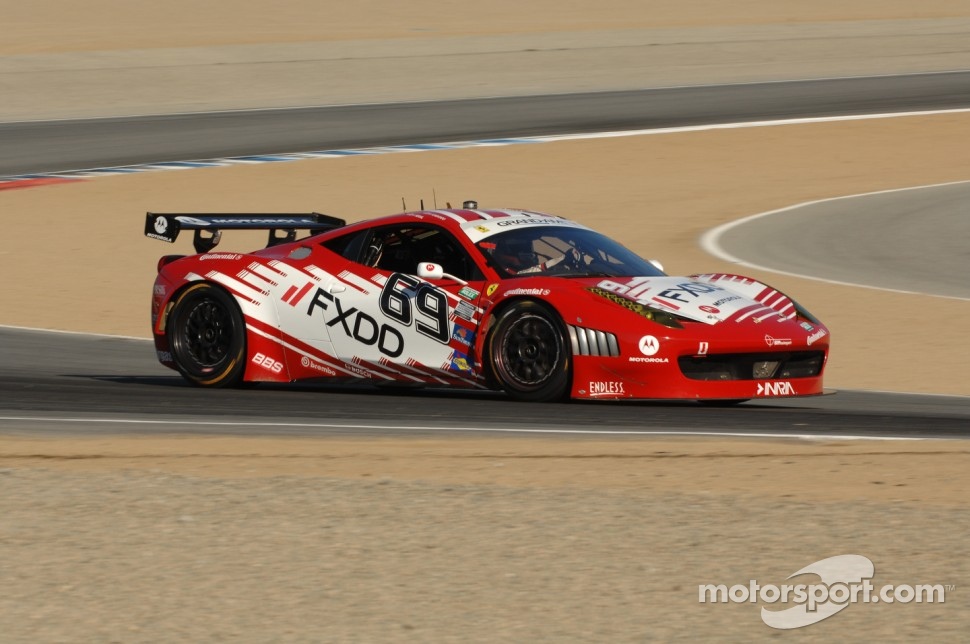 More from
Team Sahlen
IMSA Others