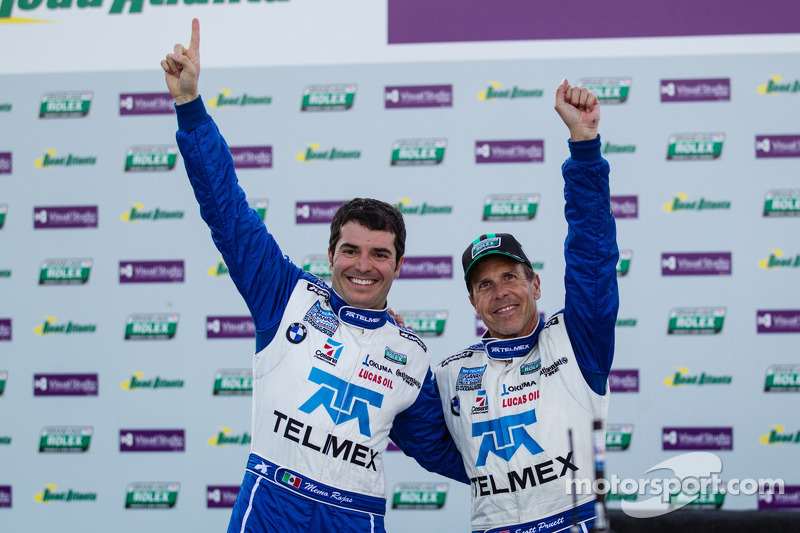 With long straights and sweeping turns, the Road Atlanta track clearly favored the straight-line speed of the Dinan-prepared BMW motor lurking underneath the bodywork of the Ganassi team's Riley chassis. Rojas drove away from the field at the drop of the green flag and he and Pruett were only out of the lead during pitstops. They were so dominant that their quickest race lap was more than a half a second faster than the next best lap - a remarkable differential in a series that typically features very close racing.

"This track is one of those tracks where momentum (is key)," explained Pruett. "Our car was not quick in one particular place, it was fast everywhere. Everything was just nice and tidy with the car. We didn't really know what to expect. We knew the car was good, but we just didn't know how good it was. And as it turned out, it was awfully damn good."

"I was not sure what the pace was going to be," added Rojas. "I knew I had to get a gap early. So I just tried to push hard the first few laps. And once I opened a gap, I just took off."

The Ganassi dup led 94 of 120 laps and now have a seven-point lead over Alex Gurney and Jon Fogarty in the Daytona Prototype class drivers' standings.

Ryan Dalziel and Alex Popow equaled their best finish of the year, with a second-place in the Starworks Ford Riley.

Corvette DPs had won the two previous races, but those victories came on tracks that favored high levels of downforce - as opposed to straight-line speed. On a high-speed course like Road Atlanta, the six Corvette entries could finish no better than third in the Rolex Series' first visit to the track. That third-place belonged to the Gainsco Bob Stallings Racing entry shared by Gurney and Fogarty, winners of the second race of the year at Circuit of the Americas.

Antonio Pizzonia dove under Max Angelelli in Turn 1 with less than two minutes remaining to secure a fourth-place finish for the Michael Shank Racing Ford Riley he shared with Gustavo Yacaman. When he made the pass, Pizzonia forced Angelelli into the grass on the outside of the first turn. Angelelli recovered to finish sixth and then he and Pizzonia collided at the entrance to the pits at the end of the race, showing that neither driver was happy with the outcome. The Spirit of Daytona Corvette DP rounded out the top-five in the hands of Richard Westbrook and Ricky Taylor.

The GT class win went to Robin Liddell and John Edwards, who won for the second time in as many races in the Stevenson Motorsports Camaro GT.R. The Park Place Motorsports Porsche GT3 Cup, driven by Patrick Long and Patrick Lindsey, came home second, followed by the No. 63 Scuderia Corse Ferrari 458 of Jeff Westphal and Alessandro Balzan.

If the race had gone a few more laps, Long may have caught and passed Liddell to give Porsche its first class win of the year. But time ran out before Long could get close enough to make a move.

"Second win in a row in GT and both races were sort of similar," explained Edwards. "A fast car chasing us down at the end. Had we had a yellow with half-an-hour or 45 minutes to go, we might not be talking as two-time winners."

The next Rolex Series race is June 1 in Detroit.