Coming into round eight at Road America last weekend, Rhett O’Doski and Andrew Carbonell sat just 25 points out of the ST team championship lead in fourth.

KANSAS CITY, Kan.—Freedom Autosport did not get the hoped-for results at Road America, but Rhett O’Doski and Andrew Carbonell are holding down sixth in ST points heading into this weekend’s round nine at Kansas Speedway.

Coming into round eight at Road America last weekend, O’Doski and Carbonell sat just 25 points out of the ST team championship lead in fourth. 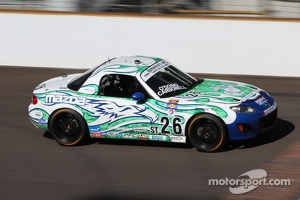 During the race, they ran in the top five in the No. 26 Freedom Autosport Mazda MX-5 and were poised for a good finish when late-race contact prompted an additional pit stop. They eventually crossed the line in 15th.

Despite the disappointing finish, O’Doski and Carbonell emerged sixth in points, and they also closed the gap to first slightly, moving to just 23 points from the top spot.

“Obviously Road America was not the finish we wanted, but we are pleased that we are still in the championship battle,” says O’Doski. “Kansas is a new track for all of us, and we’re looking forward to showing what we can do there.”

“It was just heartbreaking,” Carbonell says of the finish. “We were running in the top five with a car that doesn’t traditionally do well at that track. At the same time, that’s what happens in racing. You have to keep your chin up and keep focused on the big picture, which is winning the championship. Everyone has good ones and bad ones, and that was a bad one.”

Freedom Autosport hopes that the 2.5-hour race at Kansas Speedway will be a good one. It will be the first time that the series has visited the track. “We’re excited to see what Kansas has in store for us since we, as well as most of our competitors, have never been there,” says Tom Long, who co-drives the No. 25 Freedom Autosport Mazda MX-5 with Derek Whitis.

“Road America showed a lot of promise, but the results didn’t speak for how competitive the team was. We really want to repay the crew’s hard work with a great finish.”

Whitis is quick to credit the crew for their efforts between each round. The No. 25 Mazda had to retire early at Road America, and the crew had it ready to go again just a few days later.

“With the GRAND-AM schedule so tight between these three rounds–three races in four weeks–the Freedom Autosport guys have worked extremely hard on the road to get the cars prepared for each event. Not only have they been prepared, but the cars have been fast at each event,” Whitis says.

Watch Freedom Autosport make their debut at Kansas Speedway when the race starts at 4:00 p.m. ET on Saturday, August 17. The race will also be broadcast on Fox Sports 1 on Sunday, August 25, with coverage beginning at 3:00 p.m. ET.