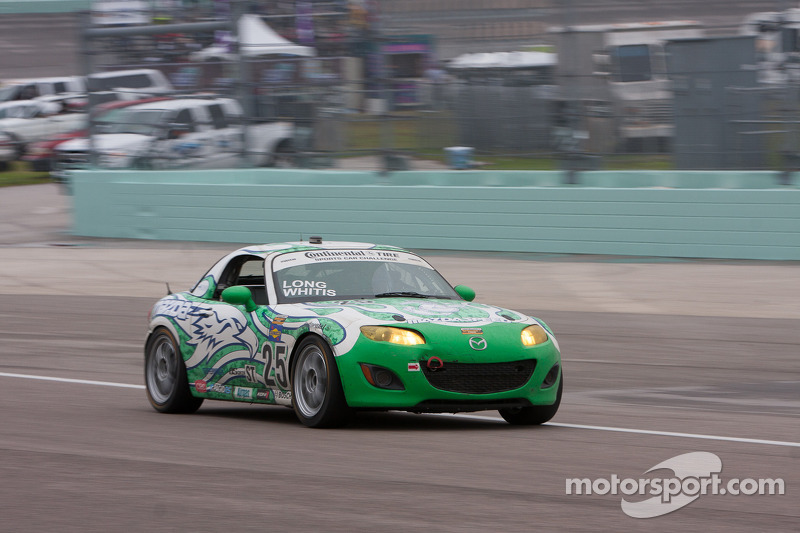 LAKEVILLE, Conn.—Freedom Autosport’s season finale at Lime Rock Park wrapped up a year of consistency and hard work that earned the team second in both the Street Tuner team and driver championships in GRAND-AM Continental Tire Sports Car Challenge. 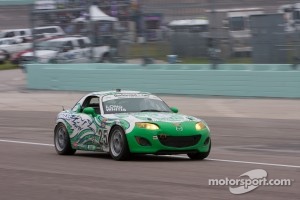 Derek Whitis and Tom Long won the previous round at Mazda Raceway Laguna Seca, which moved them into the team and driver points leads. They needed to finish sixth or better at Lime Rock to clinch the titles.

For most of the race, the team was poised to do just that. After starting on the pole, Whitis was never out of the top two and led the race during his stint. After a quick pit stop, Long took over and was also running up front. As the race progressed, though, a misfire developed that slowed lap times.

Eventually, Long crossed the finish line in tenth. Although it wasn’t enough for a championship, both Whitis and Long are quick to note that the finish caps off a season with no DNFs for the No. 25 Mazda. In fact, they won the Continental Tire Driving Confidence Award for completing the most ST miles during the season.

Whitis comments, “I couldn’t be prouder of all the Freedom Autosport folks who put us on the track with the fastest and most dependable Mazda possible. All of our success this year is due to their work and their efforts. Thanks to Mazda, the amazing Freedom crew, and most of all, the veterans and troops who make it all possible.”

“The Freedom Autosport crew really proved themselves with the new cars they built this year,” says Long. “They are the reason we’ve had such consistency and reliability all season, and they’ve given so much hard work and dedication this year: in the shop, at the track, and especially in pit stops.”

In addition to racing, Freedom Autosport also hosted Liam Dwyer throughout the weekend. Dwyer was injured in Afghanistan while serving in the Marines, and he’s not only a race fan but a track day enthusiast. He has even rigged up a system so he can drive with his prosthetic leg.

On Saturday night, Dwyer was Freedom Autosport’s guest at the championship banquet, where he was introduced and received a standing ovation from the series teams.

“It was great having Liam at the track with us,” says Freedom Autosport co-owner Rhett O’Doski, who finished 11th along with Andrew Carbonell in the No. 26 Mazda MX-5. “Our team supports all of our men and women in uniform and we’re involved with the Injured Marine Semper Fi Fund, so this was a great way to honor someone who’s made sacrifices for our country.”

Grand-Am, ALMS officials discuss with manufacturers next steps to unification