DAYTONA BEACH – With most of this morning at the Rolex 24 At Daytona run under a full course caution due to fog, the sun later rose and so too did the FOAMETIX/Burtin Racing with Goldcrest Motorsports team up the order in this weekend’s Rolex 24 At Daytona. 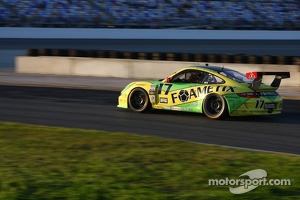 The No. 17 FOAMETIX/Z-Value Porsche GT3 of lead driver and team owner Claudio Burtin, and teammates Martin Ragginger, Jack Baldwin, Mario Farnbacher and Robert Renauer, survived a challenging night, foggy morning and a bump-and-run incident from a BMW competitor to post the team’s best career Rolex 24 finish. The 10th place showing was the best to date and first in the top 10 for FOAMETIX/Burtin Racing in six attempts at America’s premier day-long endurance race.

Team Owner Claudio Burtin came to Daytona with the goal of finishing the race and joined the team in hoping to break their six-year streak without seeing the checkered flag.

“We learned how to finish at Indy,” said Burtin, who joined Ragginger for a career-best finish of sixth last July in the inaugural Brickyard Grand Prix. “Now we finished at Daytona and we finished top 10. This was a great effort by everybody. Martin, Mario, Robert, Jack and the Goldcrest crew did a fantastic job. The car is hit and beat up but they kept it together and in true form, ‘Frankensteina’ finished. The heavens were shining on us this weekend. My mother came out and blessed everything. It’s amazing it stayed together.”

“Frankensteina” is the affectionate nickname the FOAMETIX team has for the No. 17 because the car is made up various chassis, tub and body and suspension components from several different years and models of Porsche GT3s. The Porsche even carries a logo and insignia of its namesake on the right rear quarter panel and front fender of the car.

Baldwin, a veteran in all kinds of weather conditions, was called on to handle Sunday morning’s hour and a half caution period.

“It really needed to be a caution period,” Baldwin said. “You couldn’t see very far at all. They did the right thing. When the fog burned off, I brought the car in. I was there for the transition stint, moving from night to day. When the car is hard to drive and there are issues like fog or rain, they come and get Jack. I don’t know if that’s good or bad, but I don’t mind.”

Baldwin wasn’t in the car when the No. 17 Porsche encountered its other big issue of the race. The GT3 was hit from behind by the lone BMW that started the race, sending the Porsche into a spin. Porsche factory driver and fellow GT competitor Patrick Long was behind the incident as it happened and caught it on his on-board camera. That marked the first time Renauer, the driver at the time, was aware of what happened.

“Patrick Long told me the Turner BMW touched me in the back,” Renauer said. “I just felt the back go loose and spun in the banking. The BMW hit me twice, so the car had some damage and a little trouble with the gearbox, but it ran well after that. We were only four laps behind the lead car and hoped we would get the top 10 finish and did.”

Despite the contact and the battle scars that showed on the venerable Porsche, the team kept running in hopes of accomplishing the two goals: finishing, and finishing in the top 10.

Ragginger, who has been the lead pro driver for the effort for all five previous races, is happy that the agony of not finishing at Daytona is now over.

“We were fighting with a 3.8 liter engine and the car is a little bit older,” Ragginger said. “I think we were one lap behind until the night. Before we had the problem we were P5, so we were right there. The problem started with the gearbox, and then in the banking we were hit by the Turner BMW and the axle broke. So, we had some problems with a few things. We finished well and it’s a success for the team to finish with this car in the top 10. We’ve never did this in six years. Now it’s time for a new car!”

Baldwin’s career has taken him to a variety of different teams, and he expressed satisfaction with the Burtin Racing and Goldcrest combined effort.

“I appreciate being a part of the team,” Baldwin said. “I think Goldcrest Motorsports did a great job preparing the car and the drivers did a great job all weekend. I applaud Claudio for six years in a row of bringing a car to the Rolex. You have to give Claudio Burtin and FOAMETIX a lot of credit for that. It’s been a long road for all of us.”