FOAMETIX/Burtin Racing with Goldcrest Motorsports climbs to top-10 territory past one-third distance at Rolex 24 at Daytona. 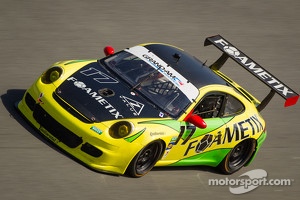 DAYTONA BEACH, Fla. (January 27, 2013) – FOAMETIX/Burtin Racing with Goldcrest Motorsports team has rallied to a promising start through the one-third distance at this year’s Rolex 24 At Daytona as the race cruised through its 10th hour late Saturday night. The Rolex 24 is currently being streamed online on SPEED.com during the overnight hours, with live TV coverage on SPEED set to resume Sunday morning at 9 a.m. EST/6 a.m. PST.

Team owner/driver Claudio Burtin qualified the No. 17 FOAMETIX/Z-Value Porsche GT3 and made an early pit stop just past the 30-minute mark in the race. From there, a rotation of his teammates Martin Ragginger, Jack Baldwin, Mario Farnbacher and Robert Renauer began and so too did the No. 17’s charge up the lineup.

A progressively improving day and night has seen the car run its pace, avoid trouble and double-stint its way from the 31st starting position to as high as ninth place in the GT class near the Midnight hour.

“In the beginning of the race, our first set of tires wasn’t great on the rears, and there were a lot of bad vibrations, so we brought Claudio in early,” said FOAMETIX/Burtin Racing with Goldcrest Motorsports crew chief Bob Sanderson. “Since then it’s been good, clicking our way up through the field, no issues. We’re just running our race.”

Just past 2 a.m. EST, working the race’s 11th hour, Ragginger is behind the wheel of the No. 17, running ninth in the GT class.

Kimball slides off track while fighting for the lead