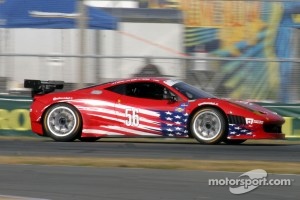 Maranello, 25 January – This coming weekend, the fiftieth running of the Daytona 24 Hours takes place at Florida’s Daytona International Speedway. The first running of this famous endurance event dates back to 1966, although as far back as 1962 there was a Daytona Continental race run over three hours. The American event is important for Ferrari, whose ties to Daytona have always been very strong: two outright wins, three over the short distance and six class victories, with 1967 deserving a special mention, when all three steps of the podium featured Ferrari drivers, confirming the Maranello marque’s dominance across the Pond.

This weekend sees the racing debut of the 458 GrandAm a development of the GT3 version of the Ferrari V8 sports car, built specifically for the American championship. Five Ferraris will race in the GT category, the opening round of the Grand Am series: two from the Risi Competizione team, crewed by Bertolini-Beretta-Vilander and Fisichella- Bruni-Matos. AF Corse’s colours will be upheld by Auguas-Kauffman-Pastrana-Waltrip, as the only Italian team entered, while Cosmo-Brown-Sharp-Van Overbeek take to the track in the Extreme Speed car and Assentato-Lazzaro-Longhi- Segal are at the wheel for AIM Autosport, who have a successful track record in this endurance event.

The race around the 5.728 km track will present the Maranello cars with many challenges, including the restrictions regarding the use of electronics and the handling of the tyres from the series’ sole supplier Continental, which features a very hard compound. The 458 GrandAm will be trying to live up to the success of the GT3 on which it’s based and which in 2011, its debut year, won countless international championships.

The event get underway on Thursday 26 January with free practice sessions and, at 16.15 the short 15 minute qualifying session. More free practice follows on Friday, while the race gets underway at 15.30 on Saturday.