Fall-Line Motorsports returns to the CTSCC podium in Texas

Brett Sandberg and Charles Espenlaub raced their Fall-Line Motorsports BMW M3 to a third place finish in the GS class on the Circuit of The Americas.

Austin, TX (March 2, 2013) - Fall-Line Motorsports returns to the podium in the Continental Tires Sports Car Challenge series as the #48 car driven by Brett Sandberg and Charles Espenlaub finished 3rd in a difficult race today at Circuit of the Americas. It was an up-and-down day all around for the three Fall-Line BMW M3s with the #46 driven by Mark Boden and Bryan Sellers finishing 6th and the #45 driven by Al Carter and Hugh Plumb bringing home 13th. 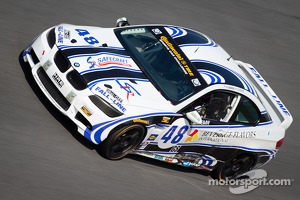 The opening stints for all three drivers were impressive and after the first round of pit stops (and a driver change for both the #45 and #46), Sandberg was P2, Plumb was P3 and Sellers P4. The #45 and #46 were able to pit just before a full-course caution came out which closed the pits, and this ultimately led to an alternate strategy for the #48 car. This turned out to be a blessing in disguise.

All three cars made stops for tires and fuel on lap 24 and Espenlaub took over behind the wheel of the #48. Plumb had to serve a drive-through penalty for speeding as he was leaving the pits, and at the same time a full-course caution came out. After everything was shaken out, Espenlaub was 5th, Sellers 6th and Plumb 11th. This last caution period was crucial to all three cars as the strategies of all were fuel dependent so the more opportunity to save fuel the better.

The single-stop strategy that the #48 car ipodiummplemented and the ability to save the most fuel placed the duo on the podium. This was the first visit for Espenlaub since Indianapolis last year, and the first-ever podium for Sandberg. Sellers, driving the #46 car was right there at the end and nearly followed Espenlaub, but he ran out of fuel at the line and lost two positions as he coasted to the checkered flag. Plumb fought hard to make up for any lost time due to the earlier penalty but had to come in for a splash of fuel with just three minutes to go.

The Fall-Line Motorsports trio all finished the race and following a trying season-opener at Daytona, will take what they can get. The third round of the CTSCC season is at Barber Motorsports Park in Birmingham, Al on April 3-6 where last year the #45 finished 3rd. Watch today's race on SPEED which will be re-played 3/9 at 4p ET.

Team Manager Michael Harvey commented on the race: "We are very happy with the Fall-Line BMWs today. Both the drivers and the whole team did a great job and it was a nice rebound from our disappointment at Daytona. Glad it could be in front of a large contingent from one of our primary partners, Trim-Tex. COTA was a great result for BMW and we are proud to represent them."

Brett Sandberg: "The car was really great today. It was a lot of fun out there. Charles did a great job bringing it home and I can't say enough about the whole team. They did a fantastic job. It was truly a good day and I can't thank everyone enough."

Charles Espenlaub: "It went well, we fought all the way to the very end, the last drop of gas. The strategy was good; the Fall-Line guys performed a great pit 46stop. We did a little bit different strategy than the other two cars and it paid off for us at the end. I'm very happy, and it's great being here at COTA and I look forward to the next one."

Mark Boden: "Great job by the whole team. We called it close on fuel strategy but we made it through. The Trim-Tex Fall-Line M3 was a great car. Bryan had a great run today; it was tough being in the car for that long but he did a great job. I'm proud of the whole team and proud of the result in front of our partner, Trim-Tex who hopefully enjoyed the show!"

Bryan Sellers: "It was a decent result for a hard day for us. We actually had a really good racecar: we had a really good balance over the course of the stint, and a good strategy as well. I was a little short of being able to save enough fuel after we went green at the end. The car bobbled a bit at the end just coming on to the front straightaway. It didn't really affect our outcome too much though; maybe we lost a position or two but really no big deal. We knew that this would be a tough race for us but to come out with one car on the podium and two cars in the top-10 gives us decent points and gives us an opportunity to move forward to the next race. As always, I think we were strong in our strategy and strong with our pit stops and we look toward the next race."

Al Carter: "Pretty bummed out with our result today, the car was great and I felt good in the car today. Please come join us at the B + Positive party this evening in Austin at Old School Bar on 6th Street where 10% of the bar goes to support the B+ Foundation."

Hugh Plumb: "It was a bit of a rough second race. My stupidity speeding in pit lane didn't help us and then pitting in the wrong pit box...it was really just overall kind of a rough day here at Circuit of the Americas. We ran out of gas and had to pit at the end with just a lap to go and that set us back to 13th. But, we have had a little bit of a dry spell in terms of finishing races and we finished today and that is a positive. I think it moves us op to 14th-15th in points after the result we had at Daytona so we just have to keep moving along."

Montecalvo's weekend at Circuit of The Americas abruptly ends