The three car BMW team ready for to take on the Circuit of the Americas in the Continental Tire Sports Car Challenge.

Buffalo Grove, IL - Welcome to the Lone Star state. Saddle up cowboys, because Fall-Line Motorsports is rolling in to town for the second round of the 2013 GRAND-AM Continental Tires Sports Car Challenge (CTSCC) season at Circuit of the Americas (COTA) in Austin, Texas. 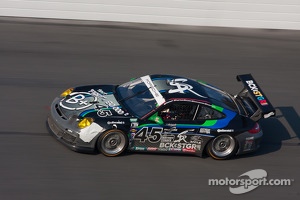 It's not a rodeo. It's not calf-roping or barrel racing or eight seconds on a bull, but it IS a high-adrenaline, two-and-a-half hour race at the renowned 3.4 mile, 20 -turn road course just outside of Austin. It's the first time for the CTSCC racing in Texas and there is not a more perfect backdrop than the capital city in the heart of the south.

Making Tracks: Circuit of the Americas, which was completed in the fall of 2012, is considered one of the top racing facilities in North America. It features considerable elevation change and that rare combination of high and low speed corners with medium and long straightaways.

'Rebel' With a Cause: B+ Racing drivers Al Carter and Hugh Plumb and Grammy Award winning producer and owner and driver of Rebel Rock Racing, Jim Jonsin, invite racing and music fans to join them downtown Austin after the race between 8p and 11p at The Old School Bar & Grill where Rebel Rock artist, Leroy Sanchez will perform LIVE during a special evening where a portion of the cash bar proceeds will be donated to The B+ Foundation.