Eric Lux, from Williamsville, NY will be driving with Al Carter at the final GRAND-AM race ever since the series is changing names for the 2014 season.

Buffalo Grove, IL (September 24, 2013) - The Fall-Line Motorsports GT program heads to not just the final race of the 2013 GRAND-AM Rolex Sports Car Series but the final GRAND-AM race ever since the series is changing names for the 2014 season after merging with the American Le Mans Series and forming the Tudor United Sportscar Series. This will be a historical event, and no better track to host a historic event than the famed Lakeville, CT circuit at Lime Rock Park. The #46 B+ Foundation/Fall-Line Motorsports Audi R8 GRAND-AM will participate in the final race of 2013 with a new addition behind the wheel but one who is not a newcomer to the Audi family. Eric Lux, from Williamsville, NY will be driving with Al Carter at the Championship Weekend event this Friday and Saturday (September 27-28).

Eric Lux drove a similar Audi R8 earlier this year as part of the international 24H Series. He drove at the 24 Hours of Dubai as well as the 12 Hours of Bathurst so he has many hours of experience with the Audi R8. 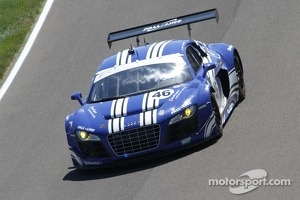 This will be the sixth and final race event for the Fall-Line GT program in 2013 and although the season has been a short one for the fledgling team, there have been great strides made in the development of the car and the overall program.

Though the results may have not have shown at the last event at Mazda Raceway Laguna Seca, the performance of the car has vastly improved from the initial run with the car earlier this season at Watkins Glen. Bryan Sellers and Al Carter drove at Laguna and turned the 3rd fastest lap of the race despite finishing 7th in the race.

The team is wrapping up 2013 but already looking toward 2014 and is in the process of finalizing plans for the upcoming season. Fall-Line is working closely with Audi Sport customer racing to determine where the current spec Audi R8 fits into the new class schedule but are looking to maintain a presence in sports car racing in the U.S. and Fall-Line is looking to continue to grow and continue to cultivate their relationship with Audi.

Eric Lux: "I am excited to have the opportunity to race not only for Fall-Line and with Al Carter, but also to be back in the Audi R8. In addition to my WEC commitments with Greaves Motorsport, earlier this year I raced for Dragon Speed in their Audi R8 at the 24 Hours of Dubai and the 12 Hours of Bathurst. The Audi R8 is a proven winner in GT racing, as is Fall Line Motorsports. Lime Rock Park has been good to me in previous years with several wins and podiums. I believe that the team has what it takes to stand on the top step of the podium and it would be great to cap-off the GRAND-AM season with just that!"

Michael Harvey, Team Manager: "We are excited to take the Fall-Line Audi program to Lime Rock. Last year Audi ran well at this track so we are confident we can continue the progress we have made this year and end on a high note. We are looking forward to having Eric drive alongside Al, as he brings a wealth of experience and will be a great asset."