Drivers Al Carter and Brett Sandberg competed in only their second race in their new Audi R8, finishing 9th in the GT category.

Indianapolis, IN - The Fall-Line Motorsports GRAND-AM Rolex team competed in only their second race in their new Audi R8 since taking delivery of their new car just over a month ago. The learning curve has been steep, but the team has met all expectations they set for themselves in their first two races. 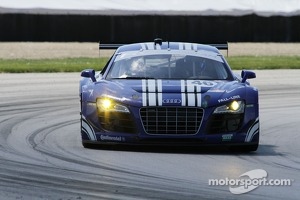 The goal at Indy was to have a clean race and finish in the top-10. Drivers Al Carter and Brett Sandberg accomplished that, running as high as 4th but finishing 9th in the GT category.

Brett Sandberg qualified the #46 B+ Foundation/ Fall-Line Motorsports Audi R8 and started the race. He and Al Carter each drove one stint, splitting the driving duties and both spending an hour and a half in the car. Both drivers drove a fantastic race and brought home a top-10 for the Fall-Line team.

Brett Sandberg: "Hats off to the Fall Line crew for doing a great job all weekend balancing the time between both series. I was very impressed with the development and balance of the car in the short period of time the team has had it. Al did a great job in the car and I am looking forward to the next race!"

Michael Harvey, Team Manager: "Another great job by all of Fall-Line Motorsports at Indy. Both of our drivers did outstanding work behind the wheel yesterday, which translated into a top-ten finish. I am so proud of this group who have come together and performed at the highest level in a very short period of time.

None of this would have been possible without the amazing support we have received from Audi both here in the U.S. and from Germany; these folks truly understand what a customer racing program should be and provide incredible support."

The only joint appearance for the GRAND-AM Rolex Series and American Le Mans Series presented by Tequila Patrón will be at Road America on August 8-11. Round 9 of the Rolex Series will be held on Saturday, with Round 6 of ALMS set for Sunday. The weekend also includes Round 8 of the Continental Tire Sports Car Challenge on Saturday, Aug. 10.

Fall-Line Motorsports is a premiere builder and fabricator of racecars for all levels of competition. Fall-Line specializes in BMW, Porsche, Audi and other high-performance makes. Fall-Line Motorsports unveiled their Grand-Am team in 2006 and won the GRAND-AM Continental Tire Sports Car Challenge GS Championship title in 2010.