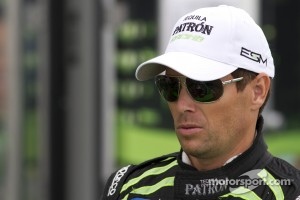 As one of few teams that has competed in both ALMS and Rolex Series GRAND-AM competition, Scott Sharp, owner of Extreme Speed Motorsports and co-driver of the No. 01 Tequila Patrón Ferrari 458 Italia, welcomed the announcement.

Since launching his own team in 2010, Sharp has two Tequila Patrón-sponsored Ferraris (No. 01 and No. 02) that compete full-time in the American Le Mans Series. In the three ALMS seasons under Sharp’s leadership, ESM has earned six podium finishes and one win.

In addition to campaigning two fully-sponsored Ferraris in the ALMS this season, Sharp and his Extreme Speed Motorsports team, in the No. 03 Tequila Patrón Ferrari, have competed in several GRAND-AM Rolex Sports Car Series races including the 2012 Rolex 24 at Daytona, Grand Prix of Miami, GRAND-AM Detroit 200 and Six Hours of The Glen. ESM earned its first team pole position at the Detroit GRAND-AM race this past June.

“I’m very excited about the potential merger of ALMS and GRAND-AM. I think bringing together the potential that both series have when it comes to TV package, scheduling, competitors and tracks, it could be huge. Hopefully, it will turn out that way," Sharp said.

“I think sports car racing needs to become more viable. It has to become more attractive to advertisers and sponsors. This potential merger has to be able to increase that opportunity by putting all fronts together pointing in the same direction. This could be a huge boost for sports cars and probably the biggest step forward in several decades.

“From our sponsor Tequila Patrón’s perspective, this can only be a huge benefit. If we can go to better tracks with bigger audiences and a more solid television package, it has to be something that Patrón will appreciate from all avenues. That is certainly the hope.”