Ryan Ellis would hold the lead for the first few laps before his Mazda experiencing some overheating issues.

Altamonte Springs, FL – There is not a much better way to start off a season than to win a pole in the first event of the year. That is exactly what I-Moto Racing and P1 Groupe driver Ryan Ellis accomplished this past weekend at Daytona International Speedway.

Ellis, the Virginia native, was looking to return to the place where he picked up his first ever GRAND-AM Continental Tire Sports Car Challenge Series victory. That victory came in not only his first ever race at Daytona but his first ever event in Grand-Am Road Racing. 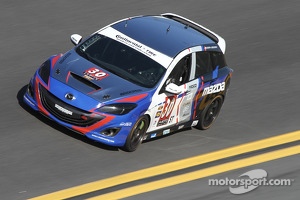 Ellis would take the green flag right around 1:45 PM local time and lead the Street Tuner field into Turn-1. He would hold the lead for the first few laps before experiencing some overheating issues.

Those issues caused him to drop back into the third position and begin sticking the nose of his #30 Mazda Speed 3 out every so often. Ellis did his best to stay with the main pack and keep his nose clean while still not getting the car too hot. He would keep the car in the lead group before his team called him into the pits. At that time Ellis handed over driving duties to Mat Pombo.

During Pombo’s stint the axle in the Mazda began to go, causing significant time to diagnose and try to fix by the team. Ellis did shine at Daytona even though an mechanical issue led to a 22nd place finish.

“It was nice to lead for a little bit at that start and try to break away from the pack” Ellis stated. “Tyler Cooke and I had a plan to try and make it two car dance, but it didn’t work out that way because the car began to overheat.

I had to drop back in the pack and just keep sticking my nose out every so often. I had a lot to take care of with saving the brakes, staying with the main pack and making sure I didn’t overheat it. All in all, we earned some points. Time to prepare for the next one!”

Trinkler shows resilience to finish 12th on SCC at Daytona