BRASELTON, Ga. – For seven minutes down the stretch, John Edwards held off steady pressure from Andy Lally to retain the lead in Saturday’s PricewaterhouseCoopers 250, the first race for the GRAND-AM Continental Tire Sports Car Challenge at Road Atlanta. 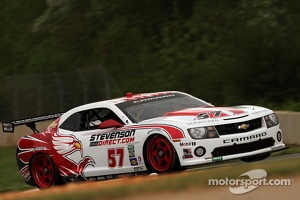 When a race-ending caution waved with 12 minutes remaining, Edwards remained in the lead, giving Stevenson Motorsports its first Continental Tire Sports Car Challenge victory of the season in the No. 9 Stevenson Auto Group Chevrolet Camaro started by Matt Bell.

Ian James impacted the tire wall at the exit of Turn 12 in the No. 158 Dempsey/Miller Racing Ford Mustang Boss 302R. While James was unhurt, the incident required lengthy repairs to the barrier that resulted in the race ending under caution.

“It was awesome running with Andy,” Edwards said after scoring the team’s fourth victory in CTSCC competition. “He was just as quick as we were, so it was good, close racing – no crazy contact or anything.”

“I think we could have won if the race remained green,” Lally said. “It was amazing racing. John was running real wide trying to keep me behind him, but I would have done the same thing.”

Edwards and Bell combined to lead 25 laps – four more than Mancuso’s dominating run in the early stages of the race.

Terry Borcheller passed Connor Bloum shortly after the final restart and went on to give Burton Racing its first Street Tuner victory in the No. 23 BMW 128i started by Mike LaMarra. Bloum finished second in the No. 80 BimmerWorld Racing BMW 328 started by Greg Strelzoff.

“I just knew that final restart was going to be our last shot,” said Borcheller, after scoring his 11th CTSCC victory and first since 2004. “I knew Connor’s car was as strong as ours, so I planned to get him in Turn 10-A. That’s exactly how it worked out. It was great to be part of Burton Racing’s first victory. That took a lot of effort by a lot of people, and their strong effort finally paid off.”