Most race fans probably don't think about where race cars come from. While the major auto manufacturers construct race cars for the highest levels of competition, most cars seen competing on tracks across the US were built by dedicated craftsmen at a race shop. Two Porsches built by DeMan Motorsport located in Blauvelt, NY and founded by racer Rick DeMan, recently chalked up three GRAND-AM championships in one weekend. 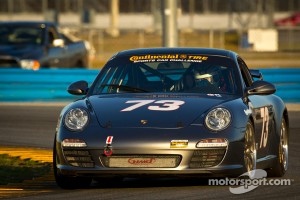 On September 29th at Lime Rock Park, the three championships were clinched by two different teams as the GRAND-AM Continental Tire Sports Car Challenge season came to an end. Both teams were running Porsche 911s built specifically for GRAND-AM competition by Rick DeMan's expert technicians, and the season finale came down to a battle between the two. Luis Bacardi's RumBum Racing's Nick Longhi and Matt Plumb won the race - their fifth of the season - thereby clinching the GS Team Championship in their colorful DeMan-built 911GS-R. The GS Driver's Championship went to John Farano and David Empringham driving the blue and silver #83 BGB 911GS-R, barely edging out Longhi and Plumb on points. The 1-2 result was a flip of the Team Championship results. The dominating success of those two cars gave Porsche the Manufacturers' Championship as well. It was an impressive season result reflecting the quality, reliability and competitiveness of the race cars from DeMan Motorsport.

At the track to watch his cars competing, Rick DeMan was happy with the finish. "I'm very glad we could help these two teams in their success this year. To see your cars on the top of the Championships at the end of the season means a lot. Not just to me, but for our entire crew at DeMan Motorsport. We know we build great cars, and now the rest of the racing community does as well. While we don't get to bring home the trophies, this is validation for what we do every day."

Turning a stock vehicle into a race car is a methodical and lengthy process. After the vehicle is completely disassembled and categorized, a complete custom safety cage is TIG welded into it. Each cage is hand fabricated in-house uniquely for each vehicle to ensure maximum safety and structural integrity. In addition to 911s, DeMan has also been building front-running Boxster racers for years. At VIR last year in the GRAND-AM race, two of their Boxsters sat on the front row, besting the rest of the 35 cars in ST. The pole-sitting car was co-driven by Porsche ace David Murray and Rick DeMan himself. The structural integrity and safety of the car was dramatically tested during the race - a testament to the build quality of the cars from DeMan Motorsport.

While the 2012 pro-racing season is coming to a close, the craftsmen at DeMan Motorsport are already working on championship-caliber race and track cars for the next year. When the 2013 GRAND-AM season kicks off at Daytona in January, you can be sure you'll see Rick's craftsmanship and expertise in the field. Based upon past results, they'll likely be in the front.

Compass360 Racing test at Kansas anything but scary