Daytona, Florida – January 31st, 2012 – Davy Jones completed a difficult 24 hour event during the 50th anniversary of the Rolex 24 at Daytona this weekend with the Godstone Ranch Motorsports team, finishing 26th in the GT class after a trouble-filled race in their #18 Texas Heart Institute Porsche GT3 Cup. 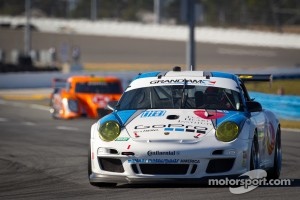 For Jones the 2012 season opener of the GRAND-AM Rolex Sports Car Series was busy not only on track, but also throughout the week as he was part of the 50th anniversary of the event and participated in all of their past Champions events after winning the historic race in 1990.

The team took the green flag at the Daytona International Speedway after qualifying on the 32nd spot of the GT field and got off to a strong start with Mark Thomas behind the wheel slowly picking up positions. As Jones was last in the driver rotation, he waited patiently on the sidelines until Saturday night while teammates Bill Lester and John McCutchen completed their first stints of the race.

Only minutes before it was his turn to get in the car, the Muhlner Motorsports America operated team suffered its first set back after a contact in the bus stop which forced the car into the garage for repairs. This set the #18 Porsche GT3 many laps down and started what would be a series of setbacks. As soon as the team got their machine back out on track Jones got behind the wheel and completed a strong first of three stints during the grueling 24 race.

Overnight running was relatively uneventful as the Godstone Ranch Motorsports drivers went through their rotations and slowly worked themselves up the timing sheets. After Jones’s third stint tragedy struck again when the Texas Heart Institute car’s gearbox failed forcing the team once again to return to the garage for lengthy repairs and forcing them to lose more time.

After a successful repair by the team their #18 car managed to go back out on track and finish the around-the-clock event in the 26th position of the GT class. The car completed a total of 609 laps and 2168.04 miles at the famed high-banked speedway.

Asian LMS to be included in Motorsport Mundial