AUSTIN, Texas – Look out, Austin. From just a few hours up Interstate 35 comes a solid, three-car Porsche GT3 effort from Dallas-based Park Place Motorsports with its eyes set firmly on capturing the inaugural GRAND-AM of The Americas Rolex Series race at the beautiful, new Circuit of The Americas Formula 1 racing facility. 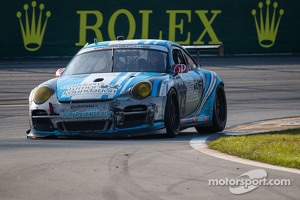 Led by Porsche factory driver Patrick Long and co-driver Patrick Lindsey in the No. 73 Park Place Motorsports Porsche GT3, the three-car lineup looks to build on a largely successful maiden voyage by the Park Place Motorsports camp at January’s Rolex 24 At Daytona. In the team’s first-ever public showing, Long laid down the fastest GT-class lap during the Roar Before the 24 test days the first weekend in January, then returned three weeks later to qualify third for the race to immediately establish the No. 73 Porsche as one of the cars to beat. But the team’s perseverance ended up being put to the test – and it passed with flying colors – in rebounding from early race issues that included a wheel nut problem and a timed penalty on pit road, as well as extensive repairs after a nighttime off-course excursion, for a hard-earned 16th-place finish. Most importantly, despite being several laps down since the early going, the No. 73 Porsche, ran lap times comparable with those of the race winners throughout the twice-around-the-clock endurance marathon.

The No. 72 Vess Energy Services Porsche GT3 for Park Place Motorsports, which overcame issues of its own to post a 14th-place finish at Daytona, is back for round two of the 12-race GRAND-AM Rolex Sports Car Series season this weekend with pro driver Mike Skeen sharing the duties with Mike Vess, chairman and managing owner of Wichita, Kansas-based Vess Oil, a company he co-founded in 1979.

New to the Park Place Motorsports stable this weekend is the No. 71 Godstone Ranch Porsche GT3 co- driven by veteran sports car racer and driving coach Jason Hart, who lives in the Dallas suburb of Flower Mound, Texas, and longtime competitor John McCutchen II. The paint scheme on the No. 71 Park Place Motorsports Porsche GT3, dubbed “The Heart Car,” features Godstone Ranch Motorsports and the non-profit organization’s support of the American Heart Association’s Hands-Only CPR program. McCutchen’s racing career includes 2010 and 2012 appearances at the Rolex 24 in GT-class competition, as well as the 2010 Rolex Series race at Miller Motorsports Park outside Salt Lake City, Utah, where he drove the Daytona Prototype-class Ford Lola for Dyson Racing, which was also sponsored by Godstone Ranch. Hart co-drove with Long, Lindsey, Spencer Pumpelly and Daniel Graeff in the No. 73 Porsche at the Rolex 24.

You’ll be racing at the Circuit of The Americas for the first time. What are your thoughts as you head there this weekend with the Park Place Motorsports Porsche team? “I’m excited. Obviously, it’s exciting getting into the groove of the regular season to start pushing for the championship. It’s always a special event when you race for the first time at a track. I have not turned a lap there but I attended the F1 GP there and got a good look at what it’s all about. I have no concerns about racing there. There is going to be a lot of passing. It reminds me of Bahrain, part of the new generation of F1 tracks. To me, it has flow and it has some twisty sections and elevation changes. Those are the things you should hope for in the new age of design. It has a lot of what Europe lacks in high-speed flow and elevation changes.

It’s great to see FIA being a little bit more lenient in how much elevation change they accept. This track is now leading the way and the bar now set for one of the best tracks in the country. I’m also a big fan of the city of Austin, where this track is a great fit. It’s great to have a draw like the COTA track, an international track, on the outskirts of a place like Austin, which represents the merger of hard core America and the more liberal arts parts of L.A., New York, Miami, and places like that. It’s obviously a great blend, a city with a lot of vibe, younger, more artsy. I think it takes a great racetrack and it takes a certain area to make it really special. This concept is more than I could’ve dreamed of.”

Looking back at the team’s first race together at the Rolex 24, how do you feel it measured up, from the perspective of a veteran factory Porsche driver? “Daytona sort of gave me a good boost of confidence. Organizationally and from a performance standpoint, as the first official race as a team, we couldn’t have expected much more. We had a few hiccups during the race that took us out of contention, but I don’t feel our finishing position truly represented the potential we have. That’s when you want to get back out on the rack as soon as possible and compete with those teams that were fighting for the victory at the end.”

Have you done much testing or other preparation since the Rolex 24 weekend? “I didn’t do any testing, but I was among the12 factory drivers who took part in the annual Porsche ‘boot camp,’ of sorts, at Tenerife in the Canary Islands. I caught a lot of grief from a lot of people accusing us of going away on a luxury vacation (laughs), but I challenge anybody to come see for themselves. It was 70 hours of highly intense sports training, and I’m proud to say I survived. It was a great, great group and I learned a lot about myself, as I do every year. It set the bar for my off-track training this coming season, and it’ll certainly contribute to what I can accomplish behind the wheel of the racecar. Now that we’ve got that out of the way, I’m ready for the fun stuff, and that starts this weekend at Austin.”

What’s your outlook for the team’s second-ever race as it heads to Austin this weekend? “There’s been a lot of work to do since Daytona. Fortunately, that’s kept my focus and has made the time go by quickly, but I’m ready to get back in the driver’s seat. Being the first race at a brand new track, there will be a lot to do this weekend in Austin from a driver’s standpoint, building our setup pretty much from scratch because we have no baseline for it. It can be a difficult task for the drivers and the engineers, but it’s going to be the same for everybody, so that levels the playing field in a big way. Patrick Long races on tracks a lot like Austin as a Porsche factory driver, so I’m hoping we have a little bit of a leg up, there. If we can get on the setup early, fine-tune some of the driving stuff, I think we’ll be in great shape. The goal is always to qualify on pole and go win the race. We’re going to do everything we can, as always, to try and make that happen.”

From what you’ve seen on paper and on video, can you compare the Circuit of The Americas to any other track you’ve been to? “I would equate going to Austin for the first time like the first time I went to any real, big, professional racetrack because they’ve done such a good job of going over the top with the facilities and the track. I’m really looking forward to it. It’s a momentum track, like Miller (Motorsports Park outside Salt Lake City, Utah), like a lot of FIA tracks in that way. I do pretty well on tracks like that. So does our team and our engineers. It’ll be really nice to work out of that facility and experience a true international racetrack.

We’re going into a new market as a racing series, but it’ll also be our hometown track since it’s just down the road from Park Place Motorsports headquarters in Dallas. Otherwise, I’ve never been to Austin, so I’m looking forward to going to the city as well as the racetrack. Being the first time going there, a win would be more special than ever. It’s like Indy last year. There will only ever be one inaugural winner for the GRAND-AM of the Americas. Your name will be at the top of the list of winners until the end of time.”

How would you size up the team’s performance in its first-ever race together at Daytona? “In general, it was a solid effort when you consider we were fast in testing, fast in qualifying, and executionally pretty much spot on the entire month as a team. But, results-wise, I think it’s going to be difficult to forget for a long time because we had such a good car and a little bit of bad luck early on. It’s probably going to sting for the rest of the year. But we’re okay in terms of points. Despite the issues we had early on in the race, our team kept its head down and looked forward and worked hard to move us forward better than any other team I’ve been a part of. It’s a good characteristic to have, and one that’s going to yield positive results in the long run.”

Dyson Racing Team concludes two-year of works-supported program with Bentley, looks ahead to 2016