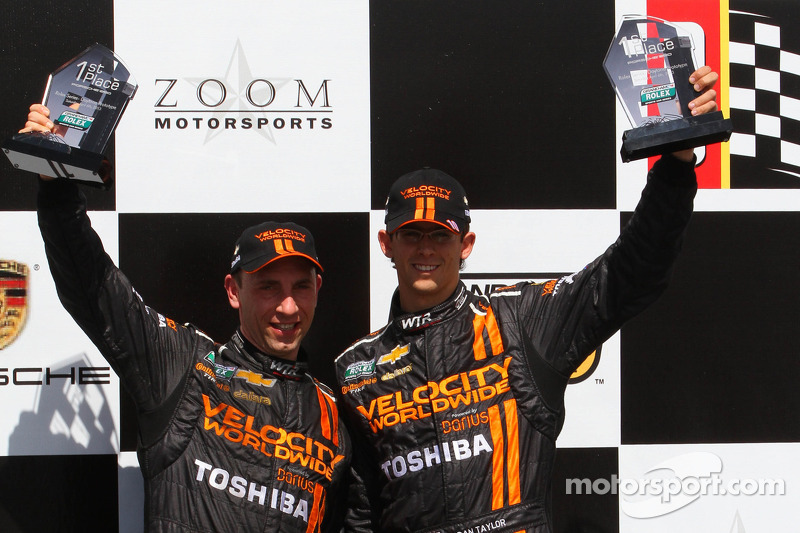 Adding to Chevrolet’s celebration was the victory of the Camaro in the GT in Grand-Am’s Rolex Sports Car Series action.

Max Angelelli in the Wayne Taylor Racing Corvette DP crossed the finish line first, with Alex Gurney in the pole sitting Bob Stallings car and Richard Westbrook in the Spirit of Daytona entry finishing second and third, respectively. It was the 22nd Rolex Series win for Angelelli and the first overall win for his co-driver, Jordan Taylor – the son of team-owner Wayne Taylor.

“We knew we had strong cars at Daytona and Austin,” explained Taylor after his first Daytona Prototype win. “And we didn’t really execute. At Austin we had the car to win. To win this early in the season is nice, especially being on my dad’s team and Max being a mentor all these years. So it’s special in that respect. But we knew we had the speed, the team, the pit stops; everything was there to win races. So I am glad we were able to execute (today).”

While Taylor and Angelelli had a near perfect race, Gurney and his teammate, Jon Fogarty, were lucky to finish second as Gurney had a misfire in his engine and then ran out of fuel with about four laps to go, forcing him to switch to the car’s reserve fuel tank.

“We were pushing hard the whole way,” explained Gurney. “When I got a clear traffic, I could gain a little bit on (Angelelli). And that kept happening back and forth. We would catch a little traffic and then split up. There was a lot of give and take within about three seconds. And that never changed the whole race.”

Westbrook and Ricky Taylor -- yes another son of Wayne Taylor -- could taste the desired win but kept the BMW-Riley team from taking a podium finish.

The Ganassi Racing BMW Riley was the best of the non-Corvette finishers, ending up fourth. The fact that Ganassi drivers Scott Pruett and Memo Rojas could not keep up with one car saving fuel (Westbrook) and another with a balky engine says a lot about how dominant the Corvettes were this weekend.

Why were the Corvettes so strong? Taylor chalked it up to the quality of the teams fielding the cars, sound race strategy, and driver lineups that feature two professional drivers in each car (as opposed to one professional driver and one amateur driver). The third-place finishing Westbrook attributed the Corvette success to the layout of the Barber track, which does not feature long straightaways and puts a premium on handling. “We’re a little slow in the engine department at the moment,” he explained. “It’s not Chevy’s fault. It’s just the rules. When we come to a track (that is) not engine dependent, then we’re very strong. The Chevy teams probably got it right today.”

Both drivers are right. At tracks that do not have long straights, the Corvettes seem to have an edge over everyone else. But at longer tracks – like Daytona – they have trouble matching the pace of the BMW- and Ford-powered Rileys. The Corvette teams also generally have stronger driver lineups than most of the Riley teams, with the exception of Ganassi. Whether the Corvette teams always have better strategy is probably subject to debate.

While Corvettes dominated the Daytona Prototype class, another Chevrolet – a Camaro driven by Robin Liddell and John Edwards – won the GT class. The Scuderia Corsa Ferrari of Alessandro Balzan closed to within a half second of Liddell in the final laps, but had to settle for second. The Marsh Racing Corvette, which has been fast in the last two races in the hands of Boris Said and Eric Curran.

The next Rolex Series race is April 20 at Road Atlanta – a track that may not favor the Corvettes nearly as much as the Alabama road course did this weekend.