Corvette and Ferrari quickest at day 2 of Daytona January test 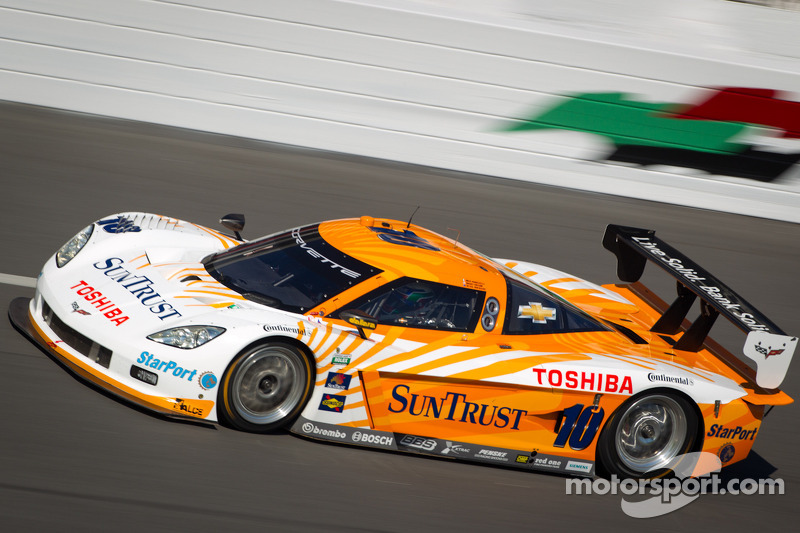 While the new Corvette Daytona Prototype continued to top the speed charts at Daytona International Speedway, one of the new stars of the GRAND-AM Rolex Series GT division made its mark on the second day of the Roar Before the Rolex 24. The new cars are part of the buzz and excitement for the upcoming 50th Anniversary of the Rolex 24 At Daytona, with several thousand fans taking advantage of ideal conditions to witness the final test for the Jan. 28-29 classic.

The Ferrari 458 Italia Grand Am – a car built specifically for Rolex Series competition – topped three of Saturday’s five sessions. Toni Vilander led the second session with a lap of 117.321 mph in the No. 63 Risi Competizione entry he shares with Olivier Beretta and Andrea Bertolini. Anthony Lazzaro was quickest in session three, running 116.564 mph in the No. 69 AIM Autosport/Team FXDD Ferrari he shares with Emil Assentato, Jeff Segal and Nick Longhi. Beretta led night practice with a lap of 117.133 mph.

If I can win this race in a Ferrari it would be fantastic.

Defending race winner and reigning DP champion Scott Pruett had a scare early in final 90-minute night session. The four-time Rolex 24 winner was tagged from behind while passing a GT car, turning Pruett around and into a barrier. The No. 01 TELMEX/Target BMW/Riley also driven by Memo Rojas, Graham Rahal and Joey Hand sustained front suspension and left-rear damage. Due to not having enough spare parts for the new Riley DPG3, the TELMEX Chip Ganassi with Felix Sabates team withdrew the car from the remainder of the test.

Fall-Line Motorsports topped the charts for the second consecutive day in the Continental Tire Sports Car Challenge GS class with Bryan Sellers posting the day’s quickest lap of 1:57.476 in the No. 46 BMW M3. Fall-Line has posted the two fastest laps of January Test Days with Charles Espenlaub turning in the weekend’s fastest lap (1:57.279) Friday in the No. 48 BMW M3. Billy Johnson was third fastest with a lap of 1:57.540 in the No. 61 Roush Performance Ford Mustang.

CJ Wilson Racing withdrew its No. 03 Mazda MX-5 following a Friday afternoon incident. Bruce Ledoux damaged the right side of the vehicle in a high-speed impact exiting the Chicane. Team principal Jason Saini said that Ledoux was OK and the car is fixable, but the vehicle will not be ready in time for January’s GRAND-AM 200. Saini said the team will have a new car ready for the season opener, and may rent a second car for the race. Owner C.J. Wilson, who will pitch for the California Angels in 2012, attended Friday’s testing but did not drive. 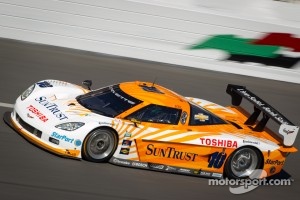 After running near the top of the speed charts in the opening three Continental Tire Sports Car Challenge Sessions, Garth Nixon was collected in two separate incidents Saturday afternoon that left the No. 44 Nixon Motorsport Mazda Speed 3 badly damaged. Nixon purchased the car from Team Sahlen and ran the 2011 season finale. Accompanied only by crew chief John Earl, the Waxhaw, N.C. driver made the trip to Daytona “as a marketing exercise to show we have a competitive team and car.” He’s hoping to have the car repaired for the season-opening GRAND-AM 200 on Jan. 27.

More than 1,000 members of the Boy Scouts and Cub Scouts of America camped at Daytona International Speedway throughout the weekend, and visited with teams and drivers throughout the test.

“For me, this is the most fun event we do all year. It gets everyone together. Sure, we want to win the race, but there’s not so much pressure. All of us on the team are pretty close with our times, so everyone pulls their weight. Our times are down a little bit right now as we learn about the new cars, but this team is consistent and it deals with problems real good. It also helps having the same driver lineup back.” – Scott Dixon, No. 02 Target/TELMEX BMW/Riley

“We’ve been testing a lot of the little aero bits, and found a lot of little things that have improved our new Corvette. I’ not worried about banging doors with anyone. The car is really strong, and I feel good about running it in the Rolex 24.” – Ricky Taylor, No. 10 SunTrust Corvette DP

“I had just passed a GT car. He hit me in the rear and I spun. That put me into the guardrail and tires. It’s definitely a little setback. Normally, we’d just throw new parts back on it and get back out there, but since this is a new car, we’re going to take the car back to the shop and take our time getting a good look at everything. We will take advantage of a bad situation and learn from it.” – Scott Pruett, No. 01 TELMEX BMW/Riley 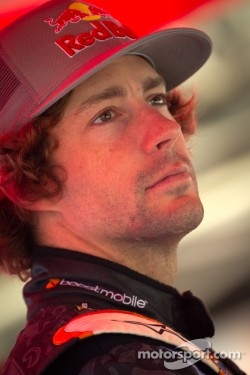 “I’ve won Le Mans twice in a Dodge, won the Rolex 24 in a Dodge and won two FIA GT championships, but if I can win this race in a Ferrari it would be fantastic. When I was seven to nine years old – even before my karting days – my uncle had a Ferrari Daytona GP and that gave me my first feeling for speed. I’m real happy being here in a Ferrari for Risi Competizione, I can’t ask for more. This is my best opportunity.” – Olivier Beretta, No. 63 Risi Competizione Ferrari 458 Italia Grand Am

“Getting to drive at Daytona was so cool. I won my first pro supercross race here, and I’ve always dreamed of driving here. When I hit the high banks for the first time, it was ‘Holy cow – here we come! It was also my first time in a Ferrari. I can’t complain. I spent last night watching footage so I can find a little more speed.” ­– Travis Pastrana, No. 56 AF-Waltrip Ferrari 458 Italia Grand Am

“I really enjoyed driving in the Aston Martin yesterday, and I hope I can run a few races in the car this season. The Continental Tire Sports Car Challenge is such a fun series. It all came together the night before, when I had the chance to talk with Multimatic’s Larry Holt, and I have to thank Mazda for letting me drive it. Aston Martin has a lot of history. You think of James Bond when you get out of the car. I think I’ll wear a fireproof tuxedo with a bow tie the next time I drive it.” – Patrick Dempsey, who tested the No. 55 Multimatic Motorsports Aston Martin Vantage on Friday

The 2012 Rolex Series season opens with the 50th Anniversary of the Rolex 24 At Daytona, Jan. 28-29. Opening practice and qualifying will be held on Thursday, Jan. 26. The Continental Tire Sports Car Challenge season-opening GRAND-AM 200 highlights the Friday schedule.