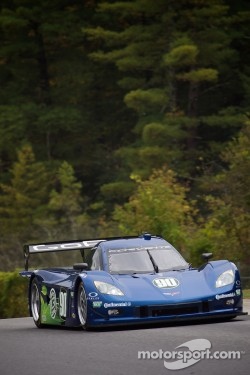 "Chevrolet is honored to have won the 2012 Engine Manufacturers' Championship in the GRAND-AM Rolex Series,” said Jim Campbell, US Vice President Performance Vehicles and Motorsports.

“This accomplishment, in the debut season of the Corvette Daytona Prototype, is the result of the dedication and hard work of our team owners, crews and drivers, along with that of our technical partners.”

On the way to winning the coveted title, Chevrolet’s Corvette Daytona Prototype teams and drivers won eight of the 13 races held during 2012 season.

"Our partners at Earnhardt-Childress Racing put forth an extraordinary effort building the engines for all of our Chevrolet Corvette Daytona Prototype teams that culminated in this championship,” said Mark Kent, Director, Chevrolet Racing.

“With the technical support Pratt and Miller provides, as well at the expertise and input from GM Racing Powertrains, Chevrolet Racing in the Rolex Series has accomplished a great deal this season.

We are very proud of this achievement, and thank everyone involved for their dedication."

“The level of cooperation and dedication among our Corvette Daytona Prototype teams, in addition to the tremendous support from our technical partners were the key components of this championship-winning effort.

I am very proud of the contributions made by everyone involved in this program, and celebrate this achievement for Team Chevy."

Chevrolet Racing will return to GRAND-AM competition in 2013 beginning with the 51st running of the Rolex 24 Hour at Daytona International Speedway on January 26-27, 2013.