Chevrolet will be busy at Road America with teams running the "Bowtie" brand in both GRANDAM series.

DETROIT - (August 7, 2013) – The challenging 14-turn/4.048-mile road course nestled in the picturesque setting of Elkhart Lake, Wisconsin known as Road America is next on the schedule for Team Chevy in the GRAND-AM Road Race Series. Round nine of the 12-race 2013 GRAND-AM Rolex Sports Car Series (Rolex) season brings with it a tight championship battle in both the Daytona Prototype (DP) and Grand Touring (GT) divisions. Winless at the high-speed track the Chevrolet contingent of teams and drivers in the Rolex Series look to be the first to bring home the ‘W’ for the Bowtie brand. 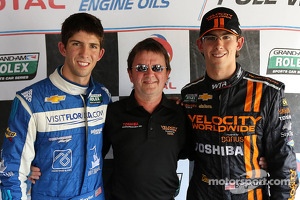 Heading into this weekend’s race, the Chevrolet Corvette DP teams and drivers have won five of eight races in the DP class and Chevrolet leads the Manufacturer Standings. In addition, the No. 57 Stevenson Motorsports Camaro GT.R has four class victories, and just recently clinched the North American Endurance Championship in the GT class.

Three Corvette DP teams sit top five in the team point standings heading into the final stretch of the season. Only 22 points separate first from fifth in the team standings. In the GT class Stevenson Motorsports sits second in the standings only four points away from taking over the top spot.

"With a tight championship point’s battle in place for our Chevrolet teams in both DP and GT, and only four races left on the schedule, a strong performance this weekend at Road America is critical,” said Jim Lutz, Chevrolet Racing Program Manager, Rolex Sports Car Series. “Road America is a demanding course that requires the cars set-up for reliability and durability. The track has numerous changes in topography that will test every aspect of the chassis and the engine. With high speed straights and tight corners, the engineers will be challenged to get the right balance the drivers need for the race. With our technical partners working very closely with our teams, we are prepared and ready to go for the weekend."

Also on this weekend’s action-packed schedule is round eight of the 11-race 2013 Continental Tire Sports Car Challenge (CTSCC) schedule.

The only Chevrolet powered team with a GRAND-AM victory in at Road America is the No. 9 Stevenson Motorsports Camaro GS.R driving duo of John Edwards and Matt Bell. With only four races remaining to decide the Continental Tire Sports Car Challenge champions, Edwards and Bell are only 33 markers away from taking over the top spot. A victory this weekend could be the turning point they need to collect the championship at year’s end.

This weekend at Road America the GRAND-AM Rolex Sports Car Series drivers will follow the Camaro ZL1 to the green flag. As the pace car, the Camaro ZL1, brings supercar levels of performance and technology to the sports car segment and is powered by a 6.2-liter supercharged small block V8 that delivers 580 horsepower with 556 lb.-ft. of torque, and has a top speed of 184 miles per hour.

While fans come to enjoy an exciting pair of GRAND-AM races on Saturday and cheer on Corvette Racing in the American Le Mans Series on Sunday, they will have the opportunity to visit the Team Chevy Racing display to enhance their fun filled weekend of racing. The display will feature a variety of Chevrolet models for guests to look at. They can check out all-new 2014 Corvette Stingray, 2014 Silverado and 2014 Impala as well as many other vehicles from the great Chevrolet line-up of cars, trucks and crossovers. The display will be open 9:00 a.m. - 5:00 p.m. on Friday, 9:00 a.m. - 5:00 p.m. on Saturday and 8:00 a.m. - 4:00 p.m. on Sunday.

The first race of the weekend, the CTSCC Road America Sports Car Challenge 2.5-hour contest, is scheduled to take the green flag at 12:30 p.m. CT on Saturday, August 10. It will be followed by the start of the 2.75-hour VisitFlorida.com Sports Car Challenge for the Rolex Series at 4:00 p.m. CT (5:00 p.m. ET).