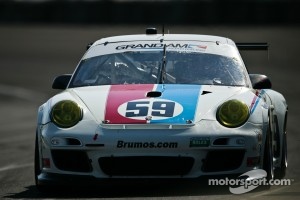 Andrew Davis and Leh Keen steered clear of the troubles that befell several leading teams. Although a fuel relay problem in qualifying forced the #59 to start from 7th, Andrew Davis again took Brumos to the front in a flawless opening stint. Staying out under the first yellow, the team’s gamble paid off as the 2nd full course caution fell at an opportune time. After a fast pit stop and driver change, Keen was making headway when contact from another GT car spun him around. Keen quickly recovered, losing little momentum and staying out, having avoided major damage.

Keen held on to 3rd place through a heated battle in the closing minutes, bringing the Brumos

Pleased with the Brumos #59 in pre-race sessions, Andrew Davis was disappointed to be forced to start from mid-pack, but wasted no time gaining ground. “Luckily, during the early incident, I was on the inside so I had an escape route and was able to pass several cars I needed to get by,” he said. “Staying out for the first yellow was good strategy. It put me in front and helped us close the gap. At the restart I put my head down and tried to build the biggest lead I could.

"We came in and had a great driver change, and then it was up to Leh. The contact knocked us back a bit and was hair- raising to watch from my seat in the pits, but Leh did a phenomenal job and held off a hard charge in the final minutes. I’m really proud to be on the podium for Brumos at Watkins Glen. It is a special place and a place Leh and I are starting to become accustomed to. We are happy with 3rd place, and now we have two podiums in a row, so we will keep that momentum going for the rest of the year.”

Despite taking the hard hit and spinning out, Leh Keen took it all in stride and continued his charge through the field. “At the end, it was a total battle,” he said. “The cars running in the top two spots were really strong, so I don’t know if we had a lot for them. In our final stop we didn’t take tires and the cars behind us did, then the caution at the end put them right behind us. That didn’t help us at all, but I was able to hold onto the position. I kind of got pinballed between some other GT cars, but the Brumos

""Although I spun out, I was pointing in the right direction when I came to a stop, so I just put it down a couple of gears, hit the gas and kept going. It was a total sprint to the finish, so our 3rd place podium feels really good. I am happy to have kept my streak alive - now I have finished the last 4 years on the podium at the Glen. We will take the battle on to our next race in Montreal and go for another podium, but hope for a higher step this time.”