Altamonte Springs, FL – Grand-Am Road Racing regular and Subaru Road Racing driver Bret Spaude proved that his #35 Subaru WRX-STI could stick with the large V8 race cars of the Continental Tire Sports Car Challenge Series during the 2013 Roar Before the 24 Test Days in early January. Spaude and company finished in the Top-10 on the speed charts in all but one session of the Grand Sport practices, and even finished on top in one. The P1 Groupe represented Spaude had a career year in 2012 notching two podiums, two poles and his first career Grand-Am victory at New Jersey Motorsports Park, all with SRRT. 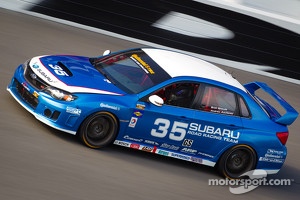 Now, flash forward to present day and you’ll see the same cast with a fast race car and one item that lacked the start of 2012, momentum. The Florida native knows just how important momentum and heart become when beginning a new season and fighting against the tough CTSCC competition. He and his team proved they were ready to fight two weeks ago. He now knows it’s time to back it up.

“The test went pretty well for us” Spaude stated. “We showed that we have a quicker car than in last year’s race, which if things had played out well could have been a Top-10 finish at one of our weaker tracks. Testing isn't always the best indicator since a few key players choose to sit out the test and of course not show all of their cards too early. Overall, we accomplished a lot of things we have been waiting to try for tracks in the future that will only make us better. The 2013 season has started strong and it’s time for us to be consistent and get great results. AJ [Andrew Aquilante] and I are pumped for this year and what we are going to achieve.”

Spaude and the Subaru Road Racing Team will be on track at Daytona International Speedway Friday, January 25th for their two and half hour opening event. About P1 Groupe: