Driving the No. 27 MARSOC Foundation/SemperFiFund.org Mazda MX-5 of Freedom Autosport, Miller went to the outside of Ryan Eversley with 23 minutes remaining to take over second place and hurt the championship hopes of Compass360 Racing’s No. 75 FamiliesForHope.org Honda Civic Si started by Kyle Gimple.

Miller later passed leader Gregory Liefooghe on a similar move in turn one with only four minutes remaining. Miller went on to win by .131 seconds over the No. 81 Johnstone Supply/United BMW Online/Powerflex/Escort/CRC BMW 328i of BimmerWorld Racing started by Tyler Cooke, while Connor Bloum and Greg Strelzoff finished third in the No. 80 BimmerWorld BMW 328i entry. 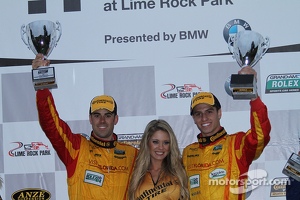 This weekend marks the only time in the 11-race season that the Grand Sport (GS) and ST classes hold separate two-hour, 30-minute races.

Momentum in the championship shifted several times. LaMarra kept the No. 23 Automotive Chemicals BMW Group/Excelda Manufacturing BMW 128i of Burton Racing in contention to claim the title throughout the opening hour, running approximately six positions behind Gimple.

Eversley took command of the chase for the next hour, as he drove second behind Liefooghe following the first restart and held that position throughout a long green-flag run for approximately one hour. Borcheller, meanwhile, struggled with traffic, finally getting into position to tie for the championship.

“I did all the math before the race, so I knew what I needed to do,” said Borcheller, who lost the CTSCC GS championship in 2004 on a tie-breaker. “Today was a thriller. It was a good way to win a championship ... fighting. That’s why we were in the position and that’s why we won the championship – because we fight.”

Eversley faded in the closing minutes to finish sixth. In the final points standings, Borcheller and LaMarra won by nine points over Eversley and Gimple (268-259), with Liefooghe and Cooke another three points back. Burton Racing won the team championship by 12 points over Compass360 Racing (271-259).

The winning car was a third entry for Freedom Autosport. The team usually enters the car for practice only, and raced it for the first time in the most recent race at Mazda Raceway Laguna Seca, finishing 20th.

“The MX-5 brakes really well here, and I knew we would have to take it on the outside,” said Miller, winning in only his second CTSCC race with Freedom Autosport. “I knew if they took the inside away, we would have to get tricky. I knew we might get away with a podium finish today, but to come away with the win is great.”

Nunez, an 18-year-old high school student from Florida, won in his first race in the series.

CJ Wilson Racing drivers Marc Miller and Tyler McQuarrie dominated the opening hour, with Miller winning the pole and leading the opening 58 laps in the No. 5 Mazda MX-5 before the first caution.

On Friday, Trent Hindman became the youngest pole winner in CTSCC history when he won the pole for the GS race, which starts on Saturday at 9:50 a.m. ET.

Seven days past his 18th-birthday, Hindman won the pole in preparation for his fifth CTSCC race. He ran a lap of 57.407 seconds (95.946 mph) in the No. 48 Fall-Line Motorsports Cirocco Ozzimo/Atlas Acon/DFL Interiors BMW M3 co-driven by Charles Espenlaub. Tonis Kasemets will start second in the No. 71 Multimatic Motorsports Aston Martin Vantage, followed by teammates Jade Buford and Scott Maxwell.

Nick Longhi will start sixth in the No. 13 Rum Bum Racing The Billfish Foundation/Rum Bum Film and HD Studios/RumBum.com Porsche 997. He and co-driver Matt Plumb will share the GS championship if both drivers are able to complete driving the minimum 30 minutes necessary to score points.

The Continental Tire Sports Car Challenge Awards will be held Saturday evening at Lime Rock Park, beginning at 7:15 p.m. with a live performance by Davy Knowles and the Paul Reed Smith Guitars Band.