DAYTONA BEACH – GAINSCO/Bob Stallings Racing once again showed strong performance in the opening stages of the Rolex 24 At Daytona and even more impressive resilience in the later stages of this weekend’s 51st running of America’s premier endurance race after rebounding from in-race issues in the season-opening event for the fifth-straight year. 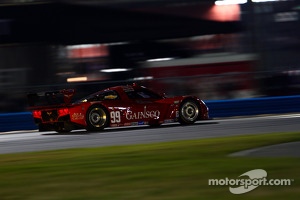 Starting qualifying driver Alex Gurney, and teammates Jon Fogarty, Memo Gidley and Darren Law, all raced in the top five in their opening stints in the first quarter of the race on Saturday, including a race-high third place run by Fogarty that evening. The No. 99 GAINSCO Auto Insurance Corvette Daytona Prototype appeared to have the pace to at least keep in touch with the race leaders. But just as quickly as the team and drivers began to settle into the rhythm of the race, an unexpected issue emerged just as it has in the previous four editions of the Rolex 24.

After Fogarty first reported some electronic shifting problems near the end of his opening stint, Gurney was at the wheel early in his second shift of the race when the No. 99’s electrical system completely went limp just before Midnight on Saturday. A quick pitside ECU (Electronic Control Unit) swap didn’t correct the problem which eventually took three trips back to the garage, a steering-wheel swap and a full 45 minutes to fix in total. The team rejoined the race last of the running Daytona Prototypes, 18 laps behind the leader and with no realistic shot at winning.

“From where we thought we were going to be after the problems in the middle of the night, it turned out pretty good,” Gurney said. “As soon as we had a problem, we knew a win was very unlikely so it turned into wanting to get as many points as possible. We didn’t want to have a big gap back to the 10 and the 01 teams, the general championship contenders. It was not too bad on that front I guess. We’re all happy to finish and move on to the next one.”

The team returned from the repairs in 12th place in the Daytona Prototype standings and spent the rest of the race using on-track pace and pitside strategy during caution periods to make up positions.

GAINSCO, with Gurney and Fogarty joined by Jimmie Johnson and Jimmy Vasser, finished a career-best second in the 2008 Rolex 24. The No. 99 squad has endured several challenges in the five Rolex 24s since that lone podium showing, but this weekend’s seventh-place finish was actually among its best Daytona results. GAINSCO also finished seventh in 2009 in addition to trouble-laden runs to eighth (2010), 12th (2011) and 13th (2012) in the following Rolex 24 races.

“We managed to claw back several positions and that is very helpful when you are looking at a season-long championship,” Fogarty said. “It is probably not a good way to go about basing your performance when your past performances have been so dismal, but we are coming out of here in better shape than we have in years past. I mean, I think we have another race or two on the calendar this season.”

GAINSCO/Bob Stallings Racing, and each of the team’s four drivers, earned 24 valuable championship points for the seventh-place Rolex 24 result.

GAINSCO was looking for more straight-line speed from its No. 99 GAINSCO/BobStallingsCars.com Corvette, but the repaired car after the overnight electrical issues were finally conquered was at least as good as it had been all weekend.

“It wasn’t too different,” Gurney said. “We had to run a different steering wheel the guys weren’t necessarily used to, but other than that, it was no different. Once we got it working it was fine. We did have to run a lot of the time without the shift-without- lift, had to back out of the throttle to get it to shift, and it was even that way at the end of the race. That was a little awkward but nothing that stopped us.”

Fogarty is more focused on substantial performance improvements for the balance of the season.

“We will just keep moving forward,” Fogarty said. “We obviously lack the performance on this particular track compared to the BMW-powered cars, but that is something we will go back and work on. The team is capable, GM Racing is capable, we have a little bit of work to do but we can get it done. We can have a car that can win races and I believe that we will.”

Gidley was a valuable member of the Rolex 24 driver lineup for the second-straight year but wanted a better result for his teammates in both races.

“Having been around the GAINSCO team for a couple of years, they really deserve so much more,” Gidley said. “In racing, sometimes that luck really helps you out but I don’t think it is luck here. It is just little problems that could happen to anybody, because from a preparation standpoint it is hard to beat this team.”

Law also proved to be a key player in his first race with GAINSCO, but left a little disappointed.