WATKINS GLEN, N.Y. – GAINSCO/Bob Stallings Racing and driver Jon Fogarty will start tomorrow’s Sahlen’s Six Hours of The Glen from the outside front row grid position in the No. 99 GAINSCO Auto Insurance® Corvette Daytona Prototype after starting spots for the race were determined by championship points Saturday after official qualifying was rained out. 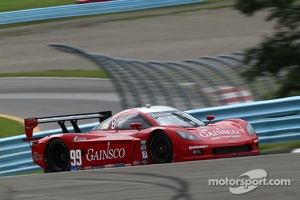 Round 7 of the 2013 GRAND-AM Rolex Sports Car Series, and the opening race of the second half of the season, the Sahlen’s Six Hours of The Glen airs live on SPEED at 11 a.m. EDT/8 a.m. PDT tomorrow, Sunday, June 30.

GAINSCO, Gurney and Fogarty, who won GRAND-AM Rolex Sports Car Series Daytona Prototype Team and Driver Championships in 2007 and 2009, are in their best mid-season championship position in team history. The No. 99 BobStallingsCars.com team and drivers head into tomorrow’s race just one point behind the championship-leading Wayne Taylor Racing No. 10 and its drivers Max Angelelli and Jordan Taylor, 173 – 172. GAINSCO’s solid championship position paid a bonus Saturday when officials set the starting field by points.

“We always want the opportunity to qualify but where we are in points makes missing it less of an issue,” Fogarty said. “Being a six-hour race, honestly it is not too critical where you start but there is always a fight for the pole, and with the TOTAL Award for the end of the year, we always want to go out there and try and demonstrate our speed.”

Fogarty will start tomorrow’s race and is scheduled to swap driving spots with his teammate three times before Gurney, the No. 99’s usual closing driver, drives the GAINSCO “Red Dragon” to the finish.

“I think you probably never think you have enough laps but we got some good running in the dry and Jon got wet running there in the last session,” Gurney said. “We got some good data to go off of and, obviously, second is a good starting position. I am not sure that we had the pace for pole, we like to think we did but we really don’t know, so second is a good spot and I think we are in good shape.”

Fogarty, the all-time Daytona Prototype career pole winner with 25, didn’t get a chance to extend his record on Saturday but was happy to get some wet-track time after qualifying was turned into a practice session.

“It was good to get some running in the rain,” Fogarty said. “There is a good chance we might have some tomorrow and having qualifying turned into a practice session gave us that opportunity. That was a positive because we have not had many laps so far. I honestly don’t know how many laps we have put in but we do seem to be here for an awfully long time with a limited amount of track time. I wish it was different.”

“We have been good in the rain here in the past so I feel fine about that if it happens,” Gurney said. “I actually heard that it was going to be dry but we will see. We will be ready in any case.”

A win in tomorrow’s Sahlen’s Six Hours would be GAINSCO’s second of the season and give the team and drivers the points leads in both championships. GAINSCO scored a storybook victory at Circuit of The Americas in the team’s home-state of Texas in March and backed it up with podium finishes in the next two races at Barber Motorsports Park (2nd) and Road Atlanta (3rd).

“The GAINSCO car is competitive, but it is a competitive field as always,” Fogarty said. “We will just try for a clean race and be there at the end.”

Race-day Sunday’s only on-track GRAND-AM Rolex Series activity is the featured Sahlen’s Six Hours of The Glen that is scheduled to go green at 11 a.m. EDT.

Rossi feels “a lot of pressure” ahead of Petit Le Mans, Baja