Jon Fogarty and Alex Gurney looking for second win of the season and championship points in Saturday’s VisitFlorida.com Sports Car 250. 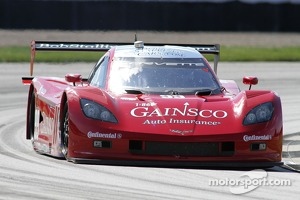 “We recognized this morning in practice that we needed to head in a different direction,” Fogarty said. “We started down that path but weren’t able to make any progress because of some yellows.

So we made our best guess at it for qualifying. It was definitely better, but it needs some fine tuning.”

“It was an OK qualifying session, we improved the car some, but maybe didn’t have the aero balance exactly the way we want,” Gurney said. “A lot of big changes from last year as far as what everybody up and down pit lane are doing aero wise. We have been adjusting to that a little bit.”

The No. 99 GAINSCO “Red Dragon,” and Gurney and Fogarty, finished third one race ago at Indianapolis, the lone Corvette in the top four that saw faster BMW-powered Daytona Prototypes finish first, second and fourth.

“I don’t think we have anything for the BMWs again but we certainly are close to being right up there with the fastest Corvettes,” Fogarty said. “Small changes around here really add up. It is such a long track with so many corners. If we can just fine tune it we will be in good shape, and I think we know how to do that.”

Track time is limited this weekend and Friday morning’s final practice was even shorter than scheduled due to some session-stopping on-track incidents.

“The morning session was kind of a waste because we just weren’t on track very much,” Gurney said. “It got black flagged just when we were starting to go out a couple of times. We did qualify ahead of the No. 2, and they are the championship leader, so that is good.”

Gurney and Fogarty are second in the driver standings with 229 points, 10 behind championship leaders Ryan Dalziel and Alex Popow in the No. 2 Starworks BMW Riley. The same 229 points has the BobStallingsCars.com No. 99 GAINSCO “Red Dragon” ranked third in the team standings.

Race-day Saturday for the GRAND-AM Rolex Sports Car Series features only the VisitFlorida.com Sports Car 250 race that is scheduled to start at 4 p.m. CDT.