Scott Pruett led a BMW sweep of the top-three positions Thursday in Grand-Am Rolex Sports Car Series qualifying at the Daytona International Speedway. Pruett lapped the high-banked tri-oval in 1:40.553 in his red, white, and blue Ganassi Racing BMW Riley to claim the pole for the 51st Rolex 24 at Daytona. The Californian was less than one-tenth of a second faster than the second Ganassi entry driven by Scott Dixon. Dane Cameron ended up third in the new Team Sahlen BMW Riley.

“For us to be one-two at the front is always exciting,” said Pruett, who has three Rolex 24 poles and four overall wins in the Rolex Series’ longest and most prestigious race. “I have so many great memories here. It was exciting to go out there and get it done.”

For us to be one-two at the front is always exciting.

Pruett needs one more win to tie Hurley Haywood for the most overall wins (5) in the Rolex 24. He will be gunning for the record with the help of regular teammate Memo Rojas as well as Juan Pablo Montoya and Charlie Kimball. The second Ganassi car will feature Dixon along with Dario Franchitti, Jamie McMurray, and Joey Hand.

Ford powered cars dominated Daytona last year, blowing away all-comers down the long straightaways. But this year, Grand-Am took 300 rpms away from the Fords and allowed the BMWs an extra 200 rpms – along with some additional air inlet trumpets. Grand-Am also put more drag on the Riley cars, meaning that they must run more dive planes in the front and a revised trim packaging on the back. Michael Valiante (Michael Shank Racing) was the fastest Ford this year, setting the fourth quickest time during the 15-minute qualifying session. Fords also qualified sixth and seventh, in the hands of AJ Allmendinger (Michael Shank Racing) and Ryan Dalziel (Starworks), respectively.

Richard Westbrook was the quickest Chevrolet-powered car, which gained 100 rpm in the offseason but was saddled with a less advantageous engine restrictor. He will start fifth in the Spirit of Daytona Corvette DP, ahead of the Corvettes of Alex Gurney (Gainsco/Bob Stallings) and Stephane Sarrazin (8 Star Motorsports). 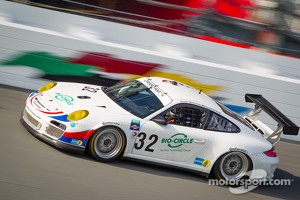 Nick Tandy, driving the Konrad Motorsport/Orbit Porsche, nabbed the GT class pole with a time of 1:47.631. “This has historically been a great track for Porsche,” explained Tandy. “It is our fifth year with the 911 so we’re really putting a good deal of effort behind everything we do towards this race and the season in Grand-Am.”

Andy Lally qualified second in the Magnus Porsche, followed by Sean Edwards’ MOMO Porsche and Patrick Long’s Park Place Motorsports Porsche. The best non-Porsche – a Ferrari 458 driven by Alessandro Balzan – ended up fourth, followed by the fastest of the Audis, the Audi R8 of Rene Rast. 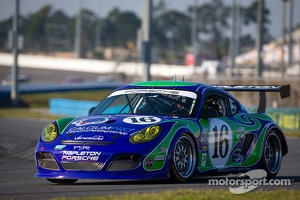 This year’s Rolex 24 will feature 16 drivers with Formula One experience, including Rubens Barrichello, Giancarlo Fisichella, and Montoya, and 60 drivers from 21 countries outside of the United States.

Continental will supply all Daytona Prototype teams with 32 sets of tires for the race and give each GT team 30 sets of tires. This includes slicks and rain tires. Continental says each set of slick tires should last for approximately 50 laps during the day and approximately 70 laps during the night. Continental has 85 people working the Rolex 24 this year, including 11 engineers to work with the teams and 74 people to work with the tires.