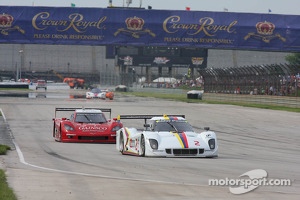 The 1-2 finish added an exclamation point to the story of the debut race for the new BMW 4.5-liter powerplant. The victory moved Dalziel and Popow to the top of the Daytona Prototype driver point standings and the runner-up finish won CGRFS a $100,000 pay day for the 2013 North American Endurance Championship.

“I am so thrilled for everyone; this win is great,” said Peter Baron, Starworks Motorsports Team Principal. “We can’t thank everyone at BMW of North America and Dinan Cars enough for getting us here in a week. Our crew was also unbelievable to get to grips so quickly with a new engine; a different handling car and the drivers were all amazing too. It feels so great that we are kissing the bricks again and now, with a 10 points lead in the Championship, this win could not have come at a better time for our title bid.”


Just feet from the world famous yard of bricks, the Speedway’s podium was almost an all-BMW affair after the checkered flag fell on the 2.5-hour Continental Tire Sports Car Challenge race with a BMW victory in both classes and a sweep of five of the top-six finishing positions.

Fall-Line Motorsports co-drivers Mark Boden and Bryan Sellers raced the No. 46 BMW M3 to a second consecutive Grand Sport victory, finishing .870 seconds ahead of the No. 61 Mustang. Third place went to Bill Auberlen and Paul Dalla Lana in the No. 96 Turner Motorsport M3. In fourth was the No. 48 Fall-Line Motorsports BMW M3 of Charles Espenlaub and Trent Hindman. The win was the third victory for the BMW M3 in the GS class to-date this season.

The Street Tuner class was a 1-2-3 BMW sweep with the No. 23 Burton Racing BMW 128i of Terry Borcheller and Mike La Marra taking their second victory of the season and moving the duo back to the top of the ST driver point standings. Jesse Combs and Jeff Mosing, driving the No. 56 RACE EPIC/Murillo Racing BMW 328i, finished second.

Notable top-10 ST finishes were posted by the No. 62 Mitchum Motorsports BMW 128i of Mike Skeen and Bret Spaude in seventh and the No. 81 BimmerWorld Racing BMW 328i of Tyler Cooke and Gregory Liefooghe in eighth.

“There are few places in the racing world that are as special as Indy,” said Gordon McDonnell, BMWNA Motorsport Manager. “Every racer dreams of standing on top of the podium at Indianapolis. BMW drivers in the Daytona Prototype, Grand Sport and Street Tuner classes did exactly that today. Congratulations also must go to Chip Ganassi Racing with Felix Sabates for winning the North American Endurance Championship.”