BMW drivers in both the Rolex and Continental Series will next compete at Watkins Glen International on June 29-30 at the Sahlen’s Six Hours of the Glen weekend. 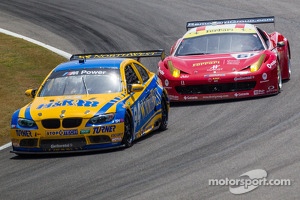 The day’s outstanding performance was delivered by Bill Auberlen and Paul Dalla Lana who co-drove the No. 96 Turner Motorsport Grand Sport class BMW M3 to second in the morning’s 2.5-hour Continental Tire Sports Car Challenge (CTSCC) race. In the afternoon, the duo won the Grand Touring class in the 2.75-hour Rolex Sports Car Series race in the No. 94 Turner Motorsport BMW M3.

The victory was the second of the season for the pair. The first came at Circuit of the Americas in March. Coincidently, Auberlen and Dalla Lana won both classes that weekend. Season-long driver Dalla Lana now stands fourth in points. The No. 93 Turner Motorsport BMW M3 of Michael Marsal and Billy Johnson finished sixth.

Additional top-five BMW results in the CTSCC race were posted by the No. 46 Fall-Line Motorsports BMW M3 of Mark Boden and Bryan Sellers who finished fourth in GS. The No. 56 RACE EPIC/Murillo Racing BMW 328i of Jesse Combs and Jeff Mosing finished fourth in the ST class after starting from the pole position. The No. 23 Burton Racing BMW 128i of Terry Borcheller and Mike LaMarra finished sixth to keep LaMarra first in ST driver points. BMW continues to lead ST Manufacturer points.

“Congratulations to Turner Motorsport for another outstanding race weekend with podiums in both the Rolex and Continental series” said Gordon McDonnell, BMWNA Motorsport Manager. “Bill and Paul gave two excellent performances in their BMW M3’s and kept the Mid-Ohio crowd on their feet till the very end. BMW drivers in the Continental Series continue to run strong with Mike LaMarra and BMW holding down first in the Street Tuner field.”

Turner Motorsport BMW M3s with "One Two" weekend at Mid-Ohio