Woodcliff Lake, N.J. - Scott Pruett and Memo Rojas continued to fight for a fourth consecutive GRAND-AM Daytona Prototype driver’s championship by posting a runner up finish at Saturday’s inaugural Rolex Sports Car Series race at the Kansas Speedway. With three top-five finishes in the last three races the CGRFS duo has moved to sixth in the standings.

With only five points separating the top-six positions in the championship Pruett and Rojas join Starworks Motorsports co-drivers Ryan Dalziel and Alex Popow as the top BMW powered drivers in the title battle. 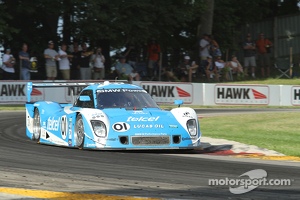 Coming to Kansas, Starworks Motorsport had won the two previous races at Indianapolis Motor Speedway and Road America, but had a disappointing evening in the Sunflower State. Brickyard Grand Prix winners Ryan Dalziel and Alex Popow finished 11th in the No. 2 BMW Riley and dropped to third in driver points. Teammates Brendon Hartley and Scott Mayer, winners at Road America, finished sixth in the No. 8 machine. Team Sahlen equaled their performance in Detroit by posting a double top-10 finish with the No. 42 BMW Riley (seventh) and the No. 43 BMW Riley (tenth).

With two races remaining in the season, BMW stands second in Manufacturer points and CGRFS continues to hold the lead in the Team championship.

In the GT class, Bill Auberlen and Paul Dalla Lana finished seventh in the No. 94 Turner Motorsport M3. Billy Johnson and Michael Marsal finished eighth in the No. 93 machine, dropping from sure third place finish on the last lap to change a leaking tire. Standing fifth, Dalla Lana is the top BMW driver in GT points.

In the Grand Sport class Fall-Line Motorsports continued its season of consistent finishes, with the No. 46 BMW M3 taking the checkered flag in fourth and the No. 48 M3 finishing seventh. The No. 46 has two wins to its credit this season at Watkins Glen International and the Indianapolis Motor Speedway. The No. 96 Turner Motorsport M3, a winner this year at the Circuit of the Americas, finished fifth.

In the Street Tuner class, the No. 23 Burton Racing BMW 128i finished second to (unofficially) keep BMW at the top of the ST Manufacturer standings and move co-drivers Terry Borcheller and Mike LaMarra back into the lead in Driver points. BimmerWorld Racing and RACE EPIC/Murillo Racing turned in three top-10 finishes with the No. 81BMW 328i in fifth, the No. 82 328i sixth and the No. 56 328i eighth respectively.

“Congratulations to Scott and Memo for a fine finish,” said Gordon McDonnell, BMWNA Motorsport Manager. “Kansas did not smile on all our teams, but it was an exciting inaugural event. There is no room for error with only two races remaining and all the titles still to be decided.”