The duo’s third runner-up finish in the last four races keeps their battle for a fourth consecutive Daytona Prototype driver’s championship alive. Now only eight points behind the leaders, the title will be decided at the Lime Rock Park season finale on Sept. 28th. 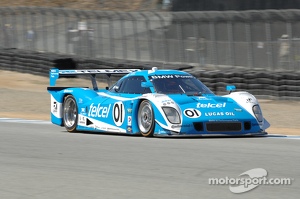 The No. 02 CGRFS Cessna BMW Riley, driven by IndyCar stars Scott Dixon and Dario Franchitti, made a second appearance this season to race in support of Pruett and Rojas’ title challenge. Dixon and Franchitti finished third resulting in an 11-point lead in the team point standings for the Ganassi team. BMW remains second in Daytona Prototype Manufacturer standings.


Third place finishes in both the Grand Sport and Street Tuner classes were the headlines for BMW drivers in the 2.5-hour Continental Tire Sports Car Challenge race.

The No. 82 BimmerWorld Racing 328i of Daniel Rogers and Seth Thomas finished seventh to make it three BMW top-10 finishes.

In the Grand Sport class, the No. 48 Fall-Line Motorsports BMW M3 of Charles Espenlaub and Trent Hindman finished third to be the top-finishing BMW drivers in the race. It may have been different if a mechanical issue with the No. 96 Turner Motorsport BMW M3 had not sidelined Bill Auberlen from second place in the closing minutes of the contest.

“All of the BMW drivers did a fine job at Laguna Seca,” said Gordon McDonnell, BMWNA Motorsport Manager. “To reach the podium in every class we compete is testament to the hard work and dedication of our teams. It could not be more fitting that all the championships will be decided at BMW’s home track, Lime Rock Park.”