In just the second race of its existence, the three-car, Dallas-based Park Place Motorsports Porsche GT3 stable of racecars and drivers has shown it could be a serious contender for a GRAND-AM Rolex Sports Car Series title before all is said and done in 2013 after a solid performance in Saturday’s inaugural GRAND-AM of The Americas at the beautiful, new Circuit of The Americas in Austin, Texas. 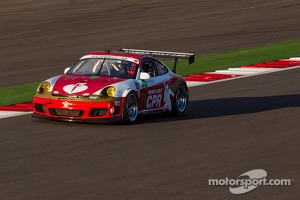 Porsche factory driver Patrick Long and his teammate Patrick Lindsey overcame a hefty early race penalty for contact deemed avoidable by Rolex Series officials and rallied for a fourth-place finish in the No. 73 Park Place Motorsports Porsche GT3. Lindsey admittedly got just a bit too ambitious while trying to overtake the No. 57 Stevenson Motorsports Camaro GT.R of John Edwards in the opening 30 minutes of the race and spun into Edwards’ car between turns 11 and 12. Shortly after turning the No. 73 Porsche over to Long under yellow at the 33-minute mark of today’s 2-hour, 45-minute race, Long was called back into the pits under green-flag conditions to serve a 60-second penalty for the contact. That sent the Park Place car from the lead all the way back to 14th place, and Long executed a tremendous drive to the checkered flag, including a run from 12th place to his final finishing position of fourth in the final 25 minutes.

Mike Vess, chairman and managing owner of Wichita, Kansas-based Vess Oil, a company he co-founded in 1979, drove a strong and steady opening stint in the No. 72 Vess Energy Services Porsche. He turned things over to co-driver Mike Skeen at the 45-minute mark, and the veteran from Charlotte, N.C., took advantage of excellent fuel mileage to work his way into the top-three over the latter stages of the race before he could no longer hold off a handful of competitors with much newer tires in the closing laps. He finished sixth.

Meanwhile, the No. 71 Godstone Ranch Porsche GT3, dubbed the “Heart Car” as its paint scheme was designed to generate awareness of the American Heart Association’s “Hands-Only CPR” program, netted a top-12 finish for its trio of drivers – John McCutchen II of Dallas, Chuck Cole of Maypearl, Texas, and Jason Hart of Flower Mound, Texas.

The next event on the 12-race GRAND-AM Rolex Sports Car Series calendar for 2013 is the annual Porsche 250 at Barber Motorsports Park in Birmingham, Ala., Saturday, April 6. The two-hour race begins at 1:45 p.m. EDT with SPEED’s next-day-delayed television broadcast set for Sunday, April 7, at 5:30 p.m.

“We were 12th on my last restart with about 25 minutes to go. I knew I had a racecar but I also knew that track position was going to be difficult because this track doesn’t make it easy to get around guys. A lot of cars got together and we were able to avoid all the melees and make a couple of passes. Ran pretty hard with (Anthony) Lazarro and we had some fun. Once I got past him and (Mike) Skeen, I was pulling the 44 and the 58 and just ran out of time. This was this team’s first top-five. We’re excited because this is our home race and to have two cars in the top-10 is exciting and the 71 car had a good run. Excited to build on this momentum. We have a lot more potential to crack open and that has me really passionate and excited because I think that’s what motorsports is all about is to grow with an organization like this. There’s a certain motivation when you go to the Porsche Platz in the morning and there are 350 people there cheering for you. It’s a great opportunity to fly the flag and get the word out about what Park Place Motorsports is all about and what they want to do to help people buy and tune their first road car all the way to racing in the Rolex Series, and driver education and the PCA (Porsche Club of America) and all that. So it’s very satisfying to put all those Porsches up there at the front here today.”

“We started the race and we were cruising around in fifth, sixth, we had a lot of car. I was just staying with the lead group, not really pushing too hard. And then, truth be told, I got overconfident in the car when I saw an opportunity to overtake the 57 (John Edwards) and I got in too deep. Actually, it would have been OK, but there was a DP (Daytona Prototype) parked there in the middle of (turns) 11 and 12, so I had to jump on the binders, lost the rear end and backed it into the 57. It was really, really unfortunate, but we came out with a great finish today. Patrick Long does what he does and the guy is unbelievable. This crew, I can’t get tired of saying the car was just phenomenal, and these Park Place guys, they always do that. I don’t know how far down we were – 14th or 15th – and to come out with a top-five is pretty remarkable. We’ll take it and the momentum to Barber (Motorsports Park). How cool would it be if we could be the Porsche team that actually won the Porsche 250? If you look at the talent on this Park Place crew, to get the Godstone Ranch American Heart Association car up there, I know they were excited about that. The Vess Energy car I think was just banging on a top-five finish. I’m just happy for everybody on the team because finally the hard work is paying off and we’re starting to see results – only two races into it.”

“I’m over the moon. I looked at the leaderboard and the group of drivers, the guys we’re competing against and running with, I mean it was fantastic. The car was so spot on. The car just kept telling you, ‘Hey, I got more, I got more.’ My role was to try to get us in clean and on the lead lap and then Mike Skeen just did a great job.”

“That was definitely a tough race. Not a usual one where it’s a battle all the way through. We got down a lap early on but we got it right back on a pit stop. It was a great call to leave us out for strategy. And then I was told we could make the fuel number if I conserve, so I was short-shifting everywhere, coasting on the brakes trying to save fuel. I don’t know what was harder, that or the run to the end for the checkered flag. That was a lot of fun, and of course we had to battle it out to the end on old tires. Held strong for a decent finish and I’m very glad to be here with Park Place and Vess Energy.”

“Our guys were doing a fantastic job trying to work whatever strategy we could. I literally came out right behind (Andy) Lally when he was on stickers. I was just a few cars back. Whether I could or not, I didn’t even attempt to pass him when he was on stickers and compromise the situation. If I would have, four turns later, the caution came out and then we would’ve gotten back onto the lead lap and we would’ve been in second place. But because I gave Lally all the respect in the world, just looking to get my first finish in a GT race, unfortunately I went a lap down. The whole race was fantastic. Every driver improved his lap times. Every driver brought the car home cleanly. No spins, no errors, and for a younger driver lineup in terms of experience in the GT ranks, I could not be happier with how well they did. Godstone Ranch, thankful to have them with us this weekend in the name of the American Heart Association. We got our other two cars in the top-six. It’s a credit to the work the Park Place people do and the product they put on the racetrack. Every single car is as good as the other car and it’s a privilege to race for them.”

“The weekend went flawlessly. The Godstone Park Place car was one of three cars that ran flawlessly. The car was the easiest GT car I have ever driven in the Rolex Series, period. And that’s saying a lot. These guys just absolutely killed it. The Flying Lizard guys who came and helped us out, it was flawless strategy. I couldn’t be more pleased with the Heart Car. It was a big, historic day. I was glad about how well we finished out. Not a bad outing. We got as much awareness on our program, got a million eyeballs on it and our message. You know, 400,000 people die each year because no one does CPR on them, so if we can get that message out and get people to want to go out and learn how to do it, we’ve accomplished our mission.”

“My day went great, actually. I thought I did better than I expected to do. It was a lot of work out in the car. I was hugely fatigued when I got done. There was just a lot happening during the entire time I was in there. We ended up pretty good considering who we were and I’ll take that all day long. We thought that a top-10 might be a dream for us. Definitely, we did well here – all of us. I was running better than I had, unless I had eight or 10 DP cars wrestling with me out there, which is a handful, especially for a rookie like me. I’m starting to get used to this car and these tires, so times are coming down and I’m slowly working toward getting more competitive in it. Got a lot of work to go, but I’m happy with where it’s headed. This track is very active. Driving Daytona is like walking your dog in the park compared to this place. This is like swimming with sharks for three-and-a-quarter miles, and then you get out of the ocean and jump right back in it and do it again. So, it was crazy. I had a great time, but it took me an hour to realize it.”

Hamilton: Red Bull has eked ahead in F1 title battle