B+ Racing's Carter and Plumb disappointed with COTA finish

The second round of the 2013 Continental Tire Sports Car Challenge did not bring the expected result to Eagle B+ Racing drivers Al Carter and Hugh Plumb.

Despite a good 6th place qualifying and a good race start, the No. 45 Fall-Line Motorsports Eagle Tech / B+ Foundation / Jetset Magazine BMW M3 ran in the top three before encountering a series of problems in the pits that forced it to be penalized for speeding and loose precious track positions. 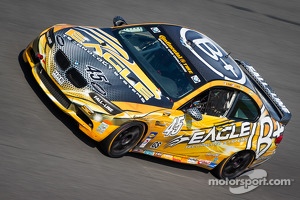 Carter and Plumb finished 13th in Austin and moved from 26th in the championship point standings to 15th with nine races to go in the 2013 season.

Of course, this result does not reflect on the performance of the overall team during the Austin event. The No. 45 BMW happens to be very competitive, the crew did a good job and without the series of problems, Carter and Plumb would have been able to fight for a top five finish position like their Fall-Line Motorsports teammates, Charles Espenlaub and Brett Sandberg, driving the 48 Fall-Line BMW who finished 3rd at Circuit of the Americas last Saturday.

Earlier in the week, Al Carter, Hugh Plumb and Joe McDonough, founder of The B+ Foundation, visited the Children’s Blood and Cancer Center at Dell Children’s Medical Center of Central Texas in Austin. The Fall-Line Motorsports drivers spent some quality time with the children in their room and were even able to invite families and a selection of social workers to attend the race, thanks to Circuit of the Americas that donated race tickets.

On Saturday, Carter and Plumb came to COTA with the desire to do well and had podium finish hopes since their No. 45 Fall-Line M3 had been competitive during all of the practice and qualifying sessions. The race started early at 10:05 AM. Carter took a good start avoiding all potential collisions and after a problem-free stint handed the wheel to Hugh Plumb in 6th place. Hugh Plumb took over after the first pit stop for fuel and tires and regained the race in 15th place and was able to run as high as 3rd during his early stint.

When the second pit stop happened, Hugh Plumb had a very slow stop. After being serviced by his crew, he left his pit too fast and got a speeding violation that resulted in a drive through that forced the No. 45 to lose even more positions.

Then in the last laps of the race while Hugh Plumb was able to fight his way back to 8th place and potentially save the day, the No. 45 was forced to pit for a needed splash of fuel and the No. 45 of Carter and Plumb finished 13th.

The next event is scheduled for April 4-6 at Barber Motorsports Park in Alabama where Carter and Plumb scored a podium finish in 2012. The Austin race weekend was also the first post-race Saturday night celebration event co-promoted by B+ Racing and Rebel Rock Racing. The event was very successful and attended by Grand-Am community members and race and music fans at the Old School Bar & Grill downtown Austin. Music sensation Leroy Sanchez delivered a stunning performance and a portion of the cash bar proceeds was donated to The B+ Foundation to help fight childhood cancer.

The Austin race at Circuit of the Americas will be televised on SPEED TV Saturday, March 9 at 4:00 PM ET.

Spirit of Daytona Looks Ahead to Barber with NOLA Test