Auberlen, Dalla Lana break through for Turner Motorsport in CTSCC win in Texas

McAleer, Miller lead CJ Wilson Racing to 1st ST class victory at the Circuit of The Americas in Austin, Texas.

AUSTIN, Texas (March 2, 2013) – Victory drought notwithstanding, there was no way that Bill Auberlen and Paul Dalla Lana had forgotten how to excel in the Continental Tire Sports Car Challenge. That was clear on Saturday, as they captured the CTSCC overall victory in the GRAND-AM of The Americas presented by GAINSCO and TOTAL, at Circuit of The Americas.

Auberlen and Dalla Lana, in the GS class’ No. 96 Turner Motorsport BMW M3, won for the first time together in two seasons. It took Auberlen holding off a furious challenge from BGB Motorsports’ Spencer Pumpelly in the closing minutes and using traffic to his advantage on the final lap to win by 3.804 seconds.

The Turner BMW was the class of the field, especially in the race’s second half. Auberlen led by as much as eight seconds and set the fastest lap of the race – 87.651 mph (2 minutes, 19.645 seconds).

“This place is pretty hard to get your arms around, and we came up with an unusual setup,” Auberlen said. “It’s like a road course setup on one side, and an oval track setup on the other. It was a very specific setup, so we definitely had an advantage.”

Pumpelly and Jim Norman were second in the No. 38 Porsche Carrera. Brett Sandberg and Charles Espenlaub were third for Fall-Line Motorsports in their No. 48 BMW M3. 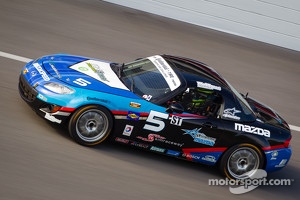 McAleer stormed through the top five in the last seven minutes to give CJ Wilson Racing its first Street Tuner victory. Last year’s SCCA Mazda MX-5 champion won in just his second ST start, and he did it in dramatic style. Driving the No. 5 Mazda MX-5 with Marc Miller, McAleer moved into the top-three with six minutes to go. While Freedom Autosport’s Tom Long and Terry Borcheller from Burton Racing swapped the lead on the next-to-last lap, McAleer made a challenge of his own.

He got around Long in the No. 25 Mazda MX-5 early on the last lap and then moved past Borcheller’s No. 23 BMW 128i and into the lead a couple of corners later. McAleer won by 0.656 seconds.

“I was getting a little desperate because I was running out of time,” McAleer admitted. “On the last lap, the guys were yelling on the radio saying, ‘We’re on the podium, don’t do anything stupid.’ So for me to be up here after winning the race is unbelievable."

The GRAND-AM of The Americas presented by GAINSCO and TOTAL for the Continental Tire Sports Car Challenge will air at 4 p.m. March 9 on SPEED. The season’s next race is set for April 6 at Barber Motorsports Park in Birmingham, Ala.