A strong qualifying session highlighted a busy day for the APR Motorsport team at Daytona International Speedway on Thursday. 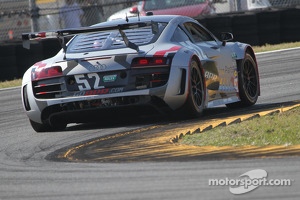 "I am pretty satisfied with the car and with qualifying the APR Audi R8 in 11th position," said Rast. "It isn't as fast in qualifying as we would like, but. I think we have a good car for the race. On Saturday, we will see."

In the sister no. 51 APR Audi R8 Grand-Am, Matt Bell qualified in 27th position as he and the team continued to work on the setup of the Audi. Bell will be partnered with David Empringham, Alex Figge, John Farano and Dave Lacey for the twenty-four hour contest.

"We went in a certain direction for qualifying and it didn't work out for us," said Bell. "The car was really good, except for in a couple of spots on the track. As strong as this field is, you can't really have a weakness anywhere and hope to be competitive. But now we know which direction to go and we have plenty of practice to get it right before Saturday."