January 11, 2012 (Opelika, Ala.) - For the first time, the howl of the 5.5 liter V-10 engine in the no. 51 APR Audi R8 Grand-Am echoed off of the high banks of Daytona, as the Alabama-based team made their first step to a season of GRAND-AM Rolex Series competition by participating in this weekend's annual Roar Before the 24 test.

Working through a few teething problems that cropped up as their Audi R8 Grand-Am hit the track for the very first time, drivers Ian Baas, Nelson Canache, Dr. Jim Norman, Emanuele Pirro and Dion von Moltke received solid seat time in the car. A standout from the moment it rolled out of APR's transporter, the Audi turned heads throughout the weekend.

This is a race I always wanted to do and I'm really happy to have the chance.

Pirro returned to Daytona for the first time in 31 years and recorded the best lap time for the team at a 1:52.480. While he provided invaluable experience that can only come with five wins at the 24 Hours of LeMans, he enjoyed his time at Daytona and with APR Motorsport.

"We have enjoyed three very good days of testing here in Daytona," said Pirro. "We came here all with very little knowledge about the Audi R8 Grand-Am, and we are still in a learning process to see what the car wants and how it wants to be driven. A lot of things here are very new - the team is new to the series, the race is new, the car is new, and most of the drivers haven't worked together before. Any one of these things would be a big task, but all of these things mean it's a huge task. We are putting as many parts of the puzzle together in order to be ready. The team will have a lot of work with three days of information to work through.

"It has been really, really nice to be back at Daytona. This is a race I always wanted to do and I'm really happy to have the chance. This is a unique situation for me because I also have a lot to learn, but it has been a very enjoyable experience with APR."

"We have a good lineup and we accomplished a lot during this test," said von Moltke. "Everyone worked together well and we are going to continue working together throughout the next two weeks before the Rolex 24 at Daytona. I'm really looking forward to putting what we have learned here into effect and showing up at the 24 to show the true potential of the Audi R8 Grand-Am and APR."

"What an amazing car and what a great weekend in Daytona," said Norman. "We all had a lot of work to get comfortable with the car and find a setup that works well for all of us. But the team worked hard and the car got better each day, and we are all feeling really good about coming back in three weeks for the Rolex 24 at Daytona." 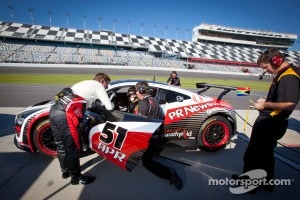 The task of preparing the team and infrastructure of the APR Motorsport team, which has competed in the Continental Tire Sports Car Challenge for five seasons, to be ready for the Rolex Series fell to APR's Director of Motorsports, Jeff Mishtawy. After the team's first weekend, he was pleased with the results.

"The test weekend was great not only in that we got to evaluate where we are at with the R8, but where the team is at with the move to the Rolex Series," said Mishtawy. "We did encounter some struggles but the team worked through all of them. All of our drivers did a great job giving us feedback throughout the weekend, and I think we all learned a lot from Emanuele. We will now go back and evaluate everything, and be as prepared as we can be for our first Rolex 24 at Daytona."

The team will be back in Daytona for the 50th anniversary of the Rolex 24 at Daytona, which begins at 3:30 PM ET on January 28 and finishes one day later, on January 29, at 3:30 PM ET. Sixteen hours of the race will be broadcast live on SPEED Channel, with the remaining eight hours available online at Speed.com.