Max Angelelli and Jordan Taylor back to within 12 points in driver championship with three races left. 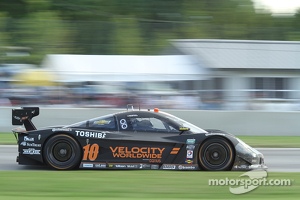 After a devastating turn of events two weekends ago in the Brickyard Grand Prix at the Indianapolis Motor Speedway plucked them from the championship lead and left them a hefty 19 points back in the standings, the No. 10 Velocity Worldwide Corvette Dallara DP duo for Wayne Taylor Racing moved back to within 12 in the driver championship and within 17 in the team points with a seventh-place result here today.

Things would have looked a good bit better in the standings had Angelelli succeeded in his attempt to get by the No. 9 Action Express Racing Corvette DP of Brian Frisselle for third place on the next-to-last lap around the 4-mile, 14-turn Road America circuit. But Frisselle held his ground – just like he did two laps earlier against another championship contender – Alex Gurney and the No. 99 Gainsco/Bob Stallings Racing Corvette DP – and Angelelli ended up getting shuffled back from fourth to his final finishing position of seventh.

Gurney, who with co-driver Jon Fogarty started the day second in the driver standings, 10 points ahead of the Velocity Worldwide duo, got shuffled from fourth to his final finishing position of eighth after his foiled attempt at a podium finish.

And, things would have looked a whole lot better for Angelelli and Taylor had it not been for a most unwelcome full-course caution flag that appeared with 41 minutes left in the two-hour, 45-minute race, just after Angelelli inherited the lead from polesitter Dane Cameron in the sentimental favorite No. 42 Team Sahlen BMW Riley. Cameron limped his first-year Daytona Prototype-class team car he shares with Wayne Nonnamaker off the track with terminal engine issues after leading a race-high 41 laps.

Angelelli, meanwhile, was about to make his final fuel-and-tire pit stop under green to set up his final charge for the race win before the fateful yellow.

All of the Wayne Taylor Racing team’s strategy came undone as the four laps – that’s 16 miles – under caution enabled several teams, including the eventual race-winning No. 8 Starworks Motorsports BMW Riley of Brendan Hartley and Steve Mayer, and the Nos. 5 and 9 Action Express Racing Corvette DPs that finished second and third, respectively, to make it to the finish without another pit stop.

“My biggest regret about today’s race is I overshot turn one and lost three positions at the end,” Angelelli said. “I feel very bad about that. It was just too bad for the team. The caution that came out just as we were about to pit for the last time really hurt us and put us in the position we were in those last few laps. It’s not a good feeling to leave here with a seventh-place finish with as good as the Velocity Worldwide Corvette was here this weekend and with how well the team executed for us in the pits and with our strategy.”

Taylor’s opening stint today, meanwhile, was a typically strong one for Angelelli’s first-year co-driver. After qualifying second to put the Velocity Worldwide Corvette on the front row for the fifth race in a row, Taylor settled back into third at the start-finish line as the No. 01 Chip Ganassi Racing with Felix Sabates BMW Riley of Memo Rojas, which qualified third, was able to motor past Taylor and followed polesitter Cameron through turn one.

Rojas spun on his own 18 minutes into the race to fall well back into the field and handed second place back to Taylor, who stayed there for the remainder of his opening stint. Taylor pitted for the first time under green, 44 minutes into the race, for four tires and fuel and to hand the Velocity Worldwide Corvette DP over to Angelelli for the rest of the race.

“My stint was OK,” Taylor said. “The Sahlen’s and Ganassi BMWs were kind of in a class of their own at the beginning. They pulled away in first and second and settled into their own rhythm. We moved up to second after Ganassi spun and we were cruising there the rest of the way. What really hurt us today was the yellow came out at basically the worst possible time for us. We lost all of our track position and, once that happens, things tend to get messy and they did.”

Despite the seventh-place finish, Angelelli and Taylor were able to pick up seven points in the standings on the No. 2 Starworks BMW Riley of Ryan Dalziel and Alex Popow, which began the day with a huge points lead after its winning effort at Indianapolis two weekends ago. Midway through today’s race, Dalziel brought the No. 2 car to pit lane with terminal engine problems of its own and the team had to settle for a 14th-place finish.

The No. 2 Starworks car’s early departure opened the door for two-time-defending series champions Scott Pruett and Rojas, who finished fourth today, to take the team championship lead in their No. 01 Ganassi BMW. The No. 99 Gainsco Corvette DP is third, nine points back of first, while the No. 5 Action Express Corvette DP of Christian Fittipaldi and Joao Barbosa slipped past the No. 10 Velocity Worldwide Corvette DP with its second-place finish today and now sits 12 points out of the team championship lead.

In the driver championship, Pruett and Rojas, who scored zero points at the Chevrolet 200 in Detroit in June after getting put out on the opening lap, moved up to sixth today and pulled to within two points of Angelelli and Taylor.

“It’s frustrating because our team was spot on with the car, our pit stops were perfect, and Jordan was outstanding at the start of the race,” team owner Wayne Taylor said. “It looked like things were shaping up quite well for us later in the race until the caution coming out when it did. That doomed our chances of winning the race. And then Max getting shuffled back at the end when he did, that ended up costing us some positions in the end. We just need to regroup and come back stronger next week.”

The GRAND-AM Rolex Sports Car Series competitors will be back at it next weekend with the inaugural running of the SFP Grand Prix at Kansas Speedway in Kansas City Saturday, Aug. 17.

Tough day at the races for Stevenson Motorsports at Road America