Allmendinger and Shank driven to succeed

Team owner Michael Shank stood by his long-time friend AJ Allmendinger during his time of admission regarding the failed drug test, and encouraged the race car driver to complete the NASCAR Road to Recovery program.

A year ago, AJ Allmendinger co-drove to victory in the Rolex24, and he was on top of the world until he failed a NASCAR drug test a few months later. For Allmendinger, his rising career was put on hold until he completed a mandatory rehabilitation program. Once cleared, he did return to NASCAR and competed in three Sprint Cup races as the season wound down, but a full-time commitment for 2013 has yet to develop.

His major commitment at this time is with Michael Shank’s team for the Rolex24 where he will team with John Pew, Ozz Negri Jr., Justin Wilson and Marcos Ambrose. Thereafter, his options are open except for a handful of Cup races with Phoenix Racing. 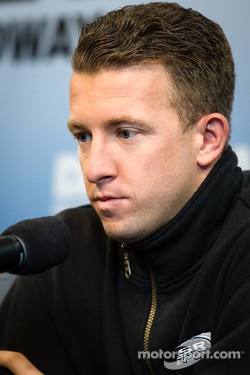 Shank and Allmendinger have been together for seven Rolex24 events, and they have done well, improving each time out and climbing to the top of the mountain a year ago.

“The Rolex will be a tough race for us,” Allmendinger said. “It is a tough field with 17 Daytona Prototypes entered, and every line-up is capable of winning. We will have to do like we did last year and be smart and not make any mistakes. You have to get yourself into the right position and have the racing gods smile upon you, which happened for us a year ago.”

After the Rolex24, Allmendinger said he’s open to offers. “I am open to anything, including IndyCar,” he commented. He’s also co-owner of a start-up IndyCar team with Shank. “We are working hard to getting that car on the race track, and I am open to any offer, including the Indy 500, but my real love is the Sprint Cup circuit. I look at this as a year that could be really fun for me. If everything works out right, I could be in a number of different types of race cars.”

As to how long it would take to adapt to IndyCar after a prolonged absence, he was quick to say, “I am a race car driver, and I can get in the thing and figure it out.”

Shank is a long-time fan of IndyCar and was frustrated a year ago not to be able to put his team on the track. However, he admits that it could happen in 2013, for the Indianapolis 500. “We are going to do one of two things: run the Indianapolis 500 only or sell the car,” he said. “Last year we couldn’t get an engine but that’s not a problem anymore. Now, it goes back to funding and the ability to buy an IndyCar came about because of sports-car racing. With sports-car stuff taking off, it has made me pause because of what happened last year at Indy. I have to do the right thing for my company and the people that work for me.

“I have a love for the Indy 500 and after having dinner with A. J. Foyt last night, I probably had the greatest time I have had in racing, listening to his stories, and it got me fired up on the Indy 500 again. But it is hard to not look at what Grand-Am and the France family has done for me not to put 110 per cent into what I am doing now.”

Whether Allmendinger would be the driver for Shank’s IndyCar, the well-spoken owner side-stepped the question, merely saying, “A. J. has some cool stuff coming.” But it when it comes down to an IndyCar investment, Shank added, “We aren’t going to spend money we don’t have; we are doing it on a business-case basis.”

Shank’s leaning seems to be with sports-car racing. “Winning this race a year ago gave us a level of respect that I have been looking for, for a long time,” he said. “When I walked into the IndyCar owners’ meeting in February, I was accepted as a guy that can do the job, and that came from the Rolex24 victory.”

Allmendinger and Shank are driven to succeed, and they should excel wherever they race in whatever equipment they use.

Trouble comes early in the Rolex 24 at Daytona