Alex Job Racing Second and 18th at 12 Hours in Daytona 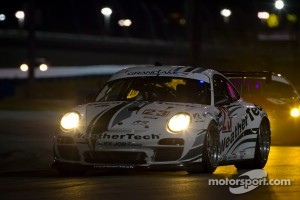 DAYTONA BEACH, Fla, (Jan. 29, 2012), Alex Job Racing (AJR) has reached the halfway point of the 50th Anniversary GRAND-AM Rolex Sports Car Series Rolex 24 At Daytona. The team is in the hunt of for the GT win at Daytona International Speedway.

The No. 23 WeatherTech/Alex Job Racing Porsche continues on its quest for the win. Drivers Cooper MacNeil, Emmanuel Collard, Marco Holzer and Butch Leitzinger are in the thick of a very strong GT battle. The guys will have the car in the lead, then pit and be relegated back to fourth or fifth and then go back to the lead. This scenario has been taking place throughout the night. At the halfway point the 23 WeatherTech Porsche is running second in GT.

"I had a good first stint," MacNeil said. "I had a moment exiting the Bus Stop Turn and had a spin, but no damage and didn't flat spot the tires. There were some moments in traffic, but nothing to crazy. I am being patient and letting people do their thing and wait for it to get worked out. We have half the race to go and things are going really good right now."

"The car is good," Collard said. "Everything is working properly, the gearbox is good. We have a little problem with our second stint on the tires, but so far so good. I adjusted my driving style in my second strint to not push too hard at the beginning to save the tires for the second fuel run and that worked better for me. At the end of the stint we are first and then when we pit we go to fourth or fifth and then back up again. It is a good fight at the front."

The No. 24 McKenna Porsche/Battery Tender/ Kensington/Koss Stereophones/Alex Job Racing GT3 Cup car driven by Cort Wagner, Bill Sweedler, Fred Poordad, Bob Faieta and Michael Avenatti is running strong in the top 15. The five drivers have not put a wheel wrong all race and are taking a measured approach to the 24 hours and running solidly in 18th at the 12 hour mark.

"The car felt really good," Faieta said. "I made a quick bar adjustment when I got in and the car. The 24 McKenna Porsche handled good throughout my stints. It took me a few laps to get going. I only have a handful of laps here at night. The guys are being extra courteous out there. I didn't have any anxious moments."

"My run was a little hairy," Avenatti said. "I got in under yellow and the restart was pretty crazy. Once I got through that it was pretty smooth sailing. The car is handling excellent. Alex and his guys prepare and run a great car."

"The car is great, not problems," Wagner said. "The gearbox is shifting nice. We just need to manage tires. When the fuel load goes down the tires are better without all of that weight on the nose. Beyond that it is great, go out and drive around. I seem to be catching everyone at the high-speed spots. You have to time those points so you don't lose time passing or letting the DPs go. It is just a matter of knowing what is going on around you at all times."

MOMO NGT is ninth after 12 hours at Daytona 24H

Dalziel breaks through with first World Challenge win of 2015

A look back at Audi's performance in the 2013 Grand Am series.

Alessandro Balzan takes on a huge challenge at Lime Rock as he aims to win the Rolex series GT title this weekend with the help of co-driver Leh Keen.