Kenny Wilden qualified sixth on Friday but will advance one position as another car had its time disallowed after a violation in post-qualifying inspection. 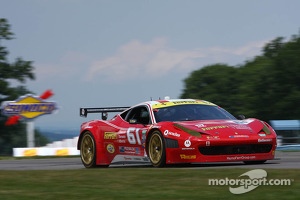 Wilden qualified sixth on Friday but will advance one position as another car had its time disallowed after a violation in post-qualifying inspection. Wilden turned a top lap time of 2:12.647 (109.862 mph) in the Ferrari and will start the No. 61 R.Ferri/AIM Ferrari in tomorrow’s race. Closing driver Jeff Segal will drive the No. 61 to the finish.

A truncated qualifying session did not allow the No. 61 R.Ferri/AIM Ferrari to replicate its third place pace in the morning practice session, but did allow new driver Wilden a chance to run his first laps in the car.

“In practice I didn’t even get a lap in; it went black every time I went out,” Wilden said. “So my first real lap was the first lap of qualifying. I was just getting more comfortable with the car. On the second lap, the session went black, and coming out of Canada Corner we had a very good lap going, but it was just unfortunate not to finish it.”

Wilden teams with Segal in the No. 61 R.Ferri/AIM Ferrari this weekend as regular team driver Max Papis is filling in for the injured Tony Stewart at the NASCAR Sprint Cup Series race in Watkins Glen.

“At Indy, I drove a Ferrari and we had a really good run there,” Wilden said. “I think that gave them some confidence when the other driver fell through. So here, I was just sitting in my GS car and Ian (Willis, Chief Technical Officer for AIM Autosport) walks over. I thought he was going to talk about Indy, and he comes over and says, ‘Do you want to drive with us this weekend?’ I said, ‘Absolutely!’ That’s as fast as it happened.”

Segal and the No. 61 R.Ferri/AIM Ferrari are seeking their second win in a row after he and Papis won the last race at Indianapolis Motor Speedway. Segal and Emil Assentato took the GT class win at Road America in 2012, in the No. 69 AIM Autosport Team FXDD Racing with Ferrari F458 Italia.

Assentato, who drives this year with Anthony Lazzaro in the No. 69 AIM/FXDD Ferrari, will start eighth in the GT class field on Saturday. Assentato turned a best lap of 2:13.630 (109.053 mph) in the qualifying session.

The only scheduled on-track activity for the GRAND-AM Rolex Sports Car Series on Saturday is the featured and timed 2-3/4-hour VisitFlorida.com Sports Car 250.