The No. 69 AIM/FXDD Ferrari took its most recent win at Road America in 2012 and ran better throughout the day than its final result would indicate in this year’s race.

ELKHART LAKE, Wis. – The No. 69 AIM Autosport Team FXDD Racing with Ferrari 458 Italia finished seventh Saturday with drivers Emil Assentato and Anthony Lazzaro in the VisitFlorida.com Sports Car 250 at Road America, the two hour, 45-minute race that was the ninth of 12 in the 2013 GRAND-AM Rolex Sports Car Series season. 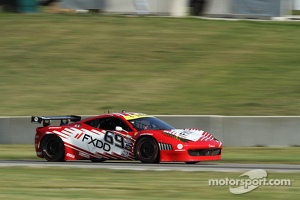 The No. 69 AIM/FXDD Ferrari took its most recent win at Road America in 2012 and ran better throughout the day than its final result would indicate in this year’s race.

Starting driver Assentato ran either seventh or eighth most of his first stint before pitting 41 minutes into the race. Assentato was balked in traffic most of his run and wasn’t able to advance more positions from his eighth place starting position.

“Yeah, the first stint was a bit disappointing,” Assentato said. “I got caught up behind some of the slower guys and unfortunately had a hard time passing. We came in early since I was stuck behind the No. 18 Porsche. We stopped off to refuel, change tires and hand off to Anthony instead of staying out and losing more time to the leaders. That’s why we came in early.”

Teammate Lazzaro took over the No. 69 AIM/FXDD Ferrari from there, and ran mostly in the middle of the top-10 for the rest of the race. He did run as high as third and was in a good position for the final stint after a late race tire change with less than half an hour remaining. The team needed to make the change after an earlier off-course excursion, as Lazzaro took evasive action to the grass when the track had oil down betweens Turn 6 and 7.

“We had fading brakes, but in spite of that, I think the late tires were the call,” Lazzaro said. “If I would have had better track position, I would have walked away, because we were fast. I wouldn’t have wanted to do the restart on scuffs. I locked up and made a few mistakes. We had fading brakes and I’m willing to accept it.”

Lazzaro explained the call by the team to take a set of four tires late in the race rather than the one tire change originally planned. “I’d had a big sideways moment through the grass,” Lazzaro said. “We hit dirt, gravel, and I did everything at once it seemed, between hitting the gas, brake, upshifting, downshifting, and using all the controls. We were only going to put the left front on, but we put all four on with stickers, because as it turned out, they were better than scuffs.

The scuffs took too long to come in. We took a little downforce out too because there wasn’t much time left. I had to hang on, but the downforce helped us on the straightaway.”

Both the No. 69 team and drivers are still in contention for the overall 2013 GRAND-AM Rolex Sports Car Series team and driver championships after Road America.

The No. 69 AIM Autosport Team FXDD Racing with Ferrari 458 Italia team, and Assentato and Lazzaro, currently rank fourth in both the GRAND-AM Rolex Sports Car Series Team and Driver Championship standings. Their current points total of 239 is just 16 behind the GT leaders in both championships.