Action Express grabs their first win of 2013 at Mid-Ohio 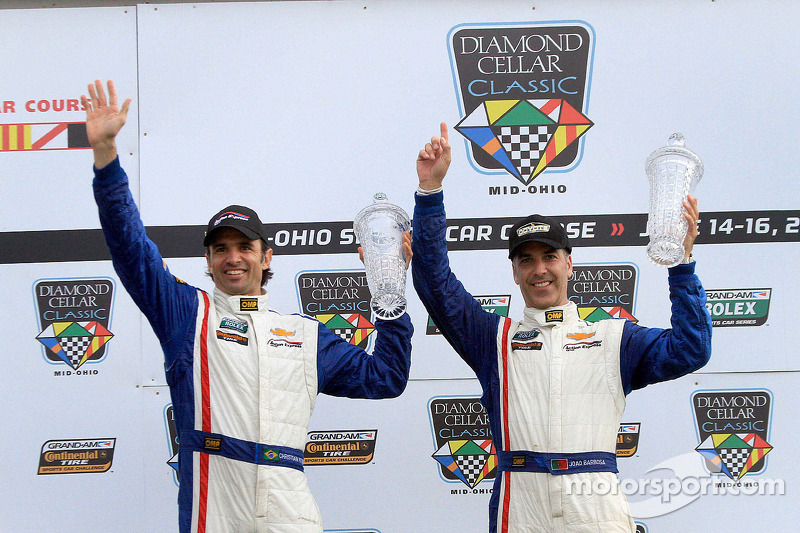 Action Express Corvette drivers Barbosa and Fittipaldi did everything they needed to in today’s Rolex Grand-Am race. Marsh Racing added to Chevrolet's celebration with the GT class win.

The Action Express squad changed its driver line-up in mid-April, with the hope of improving the performance of both of their Corvette DP cars. The team decided to pair Barbosa and Fittipaldi in one car and place Burt and Brian Frisselle in the other car. The changes definitely helped the No. 5 entry, producing a runner-up finish for Barbosa and Fittipaldi two weeks ago in Detroit and a win today. The Frisselle brothers by contrast, have struggled. They finished seventh today and 11th at Detroit.

“What a great race,” said Barbosa from victory lane. “We’ve been fast all year, but didn’t have the results. Now (the results) are starting to show up.”

Barbosa passed Richard Westbrook for the lead with less than 30 minutes to go in the race. Westbrook spun off the track while trying to regain the lead. Westbrook had to hand the No. 90 Spirit of Daytona Corvette DP back to co-driver Ricky Taylor near the end of race because of the excessive amount of carbon dioxide finding its way into the cockpit of the car. Westbrook and Taylor finished ninth, one lap down to the winners.

The second-place finish by Valiante and Enzo Pottolicchio came two weeks after their car suffered chassis and gearbox damage at Detroit.

Ryan Dalziel and Alex Popow shared third in the Starworks Ford Riley, while the No. 60 Michael Shank Racing Ford Riley and the Gainsco/Bob Stallings Racing Corvette DP rounded out the top-five in the Daytona Prototype class.

Two weeks after scoring no points at Detroit, Memo Rojas and Scott Pruett had another terrible race in the Ganassi Racing BMW Riley. They finished 21st overall, seven laps behind the race-winning Action Express car. Things started going wrong for Rojas just seven laps into the race, when Gustavo Yacaman - already on probation for crashing Rojas on the first lap in Detroit - ran into Rojas again. Rojas did not suffer any damage in the collision, but Yacaman broke the left front suspension on his Michael Shank Racing Ford Riley. The damage resulted in an off-course excursion followed by a fire in the back of the car. Yacaman leapt from the burning car and was not injured. But the fire did a considerable amount of damage to his car.

About an hour later, Rojas ran into Valiante’s car as the two battled for position, breaking a bolt in the front end of the Ganassi entry. “We just haven’t been running consistently and we have been starting further back than we’re used to,” said Rojas. “It’s bad karma.”

Eric Curran, driving the Marsh Racing Corvette, crossed the finish line first in the GT class. But series officials did not like how he took the lead by spinning-out then-leader Bill Auberlen with about a minute and a half to go in the race. So they penalized Curran one minute and 24 seconds at the end of the race. The penalty meant that Auberlen and his co-driver, Paul Dalla Lana, won for the second time this year in the Turner Motorsports BMW M3.

“That was a hard race,” said Auberlen afterward. “I burned up the tires a little early. But Eric still had to hit me to get by. (Eric’s) a nice guy, but it’s still disappointing.”

Curran admitted that the penalty was rightfully assessed. “That was my bad. I didn’t want it to end that way. I tried to get inside of him a number of times and it just wasn’t enough. He had a little more motor than me.”

The Stevenson Motorsport Camaro GT.R had won the last three races, but finished 10th in class after being assessed a stop-and-go plus 60 second penalty for running into the AIM Autosport Ferrari while leaving the pit road on lap 77.

Andy Lally and John Potter came home second in GT in the Magnus Racing Porsche, followed by the No. 60 AIM Autosport Ferrari shared by Emil Assentato and Anthony Lazzaro.

Sylvain Tremblay and Tom Long won the three-car GX class in the No. 70 SpeedSource Mazda6.

The next Rolex Series race is the six-hour event at Watkins Glen International on June 30.