Officially, the history books had Nick Heidfeld down as the true record holder courtesy of his famous 1999 run in the McLaren MP4/13 F1 machine that buzzed the line at 41.6s.

Unofficially, however, Romain Dumas had been the fastest driver up the famous 1.1-mile route aboard the Pikes Peak-winning Volkswagen ID.R - he eventually posted a 39.9s effort.

However, Dumas’ run in the ID.R, which was tuned specifically for Goodwood, was set in the Saturday qualifying session and not in the officially recognised Sunday shootout climax.

Regardless, Chilton has surpassed both benchmarks thanks to a remarkable and definitive 39.08s charge in the astonishing McMurtry, which instantly deploys 2000kg of downforce from a fan.

Having attended the Festival of Speed summer event since he was four years old, Chilton said: “I never thought that was going to happen.

“If someone had said, ‘One day you’re going to beat every single person that’s ever gone up that hill,’ I wouldn’t have believed you. It’s a real honour.

“I didn’t sleep last night. I got one hour’s sleep because I was so stressed. Pressure makes diamonds, as they say!” 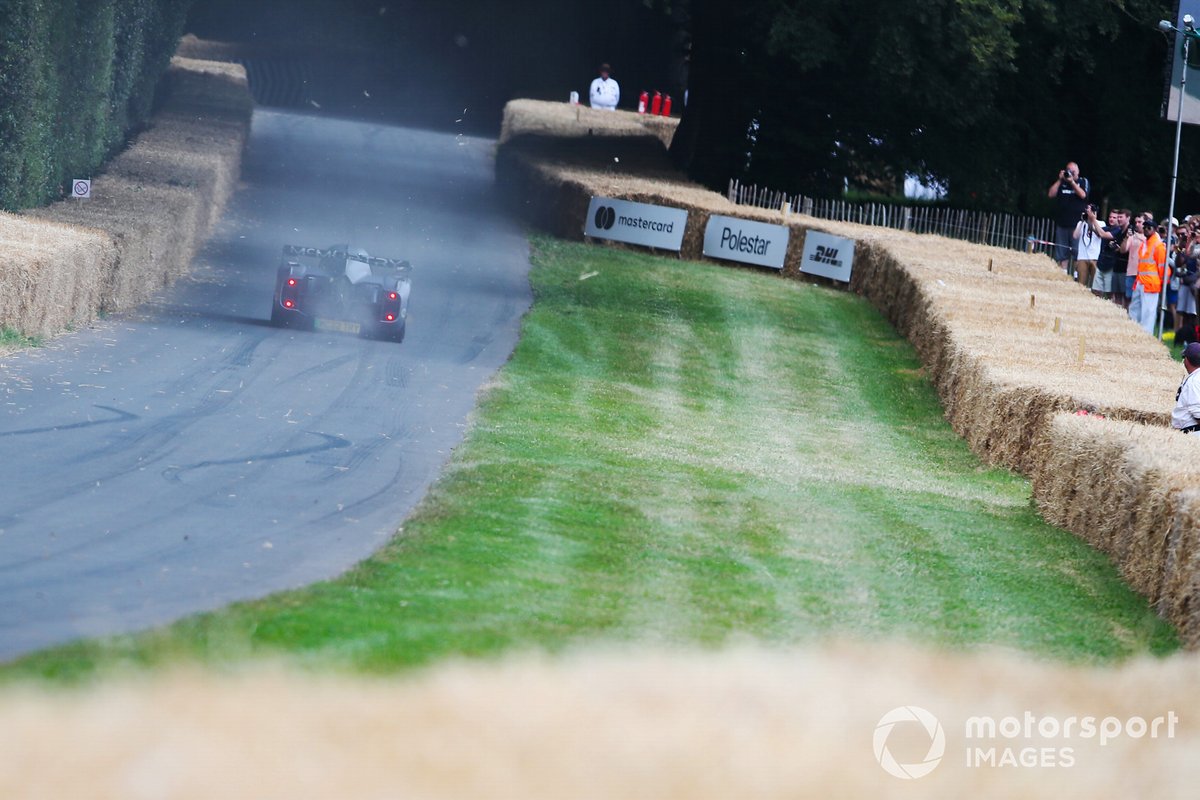 The McMurty, likened by many to a miniature Batmobile, is based around the diminutive footprint of a 1960s grand prix - that gave Chilton plenty of room to dart between the haybales.

The all-electric single-seater, closed-cockpit machine tips the scales at fewer than 1000kg to have a power-to-weight ratio of 1000bhp per tonne.

Chilton, who had split the driving duties with British Hillclimb championship points leader Alex Summer in order to attend a wedding on Saturday, posted a 39.14s in qualifying.

Chilton, who called the Festival of Speed “the greatest garden party in the world”, was congratulated and embraced at the top of the root by the Duke of Richmond and both Dumas and Heidfeld.

The impressive McMurty, the last car to run in the timed shootout, dominated proceedings as the next fastest machine was the Porsche 718 GT4 ePerformance as driver Richard Lietz clocked a 45.502s to finish as runner-up.

Former shootout winner Justin Law was back in his ‘Bud Light’ Jaguar XJR-12D to clock fourth, having crashed out in 2021 when it’s low-downforce-spec rear wing hanging behind the rear bodywork caught a haybale.

Travis Pastrana, who rolled a Subaru rallycar earlier in the weekend, ran to fifth in the custom Subaru GL Family Huckster, complete with 860bhp and a dizzying array of airbrakes.

The shootout took place after the customary balcony ceremony, capped off in 2022 by the 30th anniversary celebrations of Nigel Mansell’s F1 world championship title.

Mansell drove both his famous ‘Red 5’ Williams FW14B and Ferrari 640 machines up the hill throughout the event.

The 2022 Goodwood Festival of Speed runs this weekend, with the fourth and final day of action from the famous hillclimb on Sunday.

The 2022 Goodwood Festival of Speed runs this weekend, with the third day of action from the famous hillclimb on Saturday.

The 2022 Goodwood Festival of Speed runs this weekend, with the second day of action from the famous hillclimb on Friday.