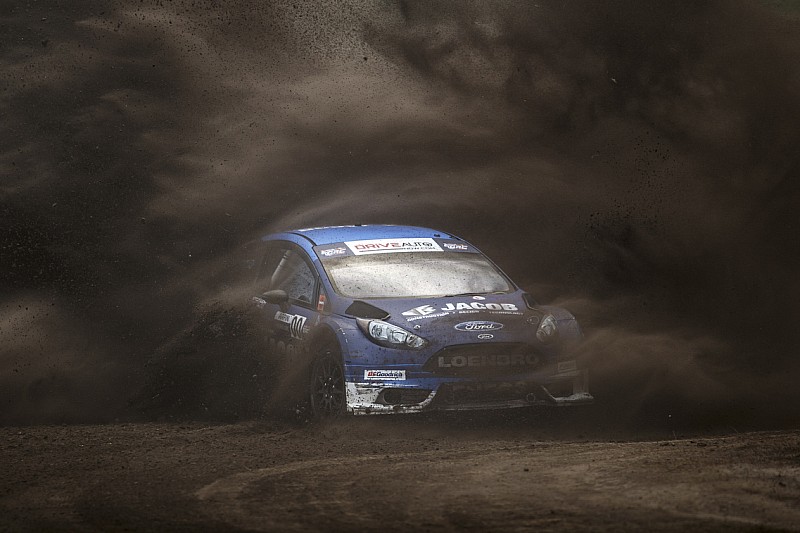 Loenbro Motorsports driver Steve Arpin took the second victory of his Red Bull Global Rallycross career at Thompson Speedway Motorsports Park on Sunday to close out the first doubleheader of the season. Arpin, who posted podiums in both Memphis and Louisville, pressured Volkswagen Andretti Rallycross’ Tanner Foust throughout the final and inherited the lead in the race’s closing laps.

“This Jacob Companies car has been so fast all weekend,” Arpin said after the race. “Tanner has been a little bit quicker, but we knew we could just stay on him and put pressure on him. That’s why I followed him into the Joker—I knew we couldn’t catch him and pass him, but we had to keep the pressure on, and it worked. He just pushed it a little bit too hard.”

What had looked to be a weekend sweep by Foust ended just a few laps short when the Saturday winner and Sunday polesitter found himself in the tire barriers in the dirt section. The incident opened the door not only for Arpin to take the win, but also for Foust’s teammate Scott Speed, who reclaimed the points lead with a second place finish. Chris Atkinson returned Subaru Rally Team USA to the podium by finishing third, earning the first trophy of his Red Bull GRC career.

A GRC Lites driver did what Supercar drivers couldn’t, as Olsbergs MSE X Forces driver Cyril Raymond swept every heat on both Saturday and Sunday on the way to dual final victories. CORE autosport driver Colin Braun earned his first podium of the season in second, while Dreyer & Reinbold Racing driver Christian Brooks continued his streak of podiums in every race by placing third.

The 2017 Red Bull Global Rallycross season resumes in two weeks with the series’ inaugural visit to Ottawa and a doubleheader round at the Canada Aviation and Space Museum.

GRC Round 3: Saturday's report from Race 1 in New England