Scott Speed took the win on both Saturday and Sunday while points leader Ken Block had a horrendous weekend. 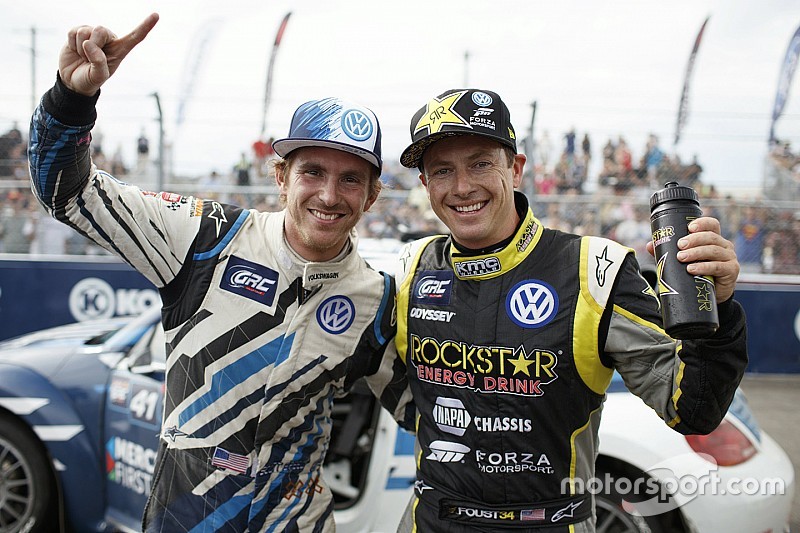 There was no stopping Volkswagen Andretti RallyCross (VARX) and driver Scott Speed this weekend at the Red Bull GRC Los Angeles doubleheader, held on a dirt/tarmac course at the mouth of the Los Angeles harbor in San Pedro.

Speed won both the Saturday and Sunday 10-lap contests as series standard on-track chaos and contact erupted behind him. The biggest losers after the first event of the two-day affair were point leader Ken Block, who came in looking to pad his lead and second-placed Sebastian Eriksson, who also failed to start the first race.

The double wins at the Port of Los Angeles elevated Speed to second place and left Block with only a 13-point margin over the Californian, who has now won more races - seven - than any other GRC driver. He moved from fourth-place points to second in the process,

After embracing team owner Michael Andretti and teammate Foust, Speed noted, “It’s a tough track; super-technical and honestly, I think it’s one of my favorites so far.”

That was evident by his lights-to-flags win in race No. 2, beating Brian Deegan’s Ganassi Ford Fiesta and Foust handily to the flags.

It’s easy to forget that Volkswagen introduced its Beetle racecar to Global Rallycross at this race last year with minimal success. There were tons of teething pains despite the success the car had at other venues. The WRC-based engine and chassis didn’t take to the Los Angeles course, which was changed greatly for the second year’s doubleheader this weekend - and apparently the VARX team and its VW team members did their homework.

There are only three races remaining in this year’s season, in Barbados and at Las Vegas, the latter contest held in conjunction (or at least at the same time as) the SEMA/AAPEX trade show on November 4. Last year Joni Wiman had to wait until the final race to earn a five-point margin over Block; Speed was third in that contest. No doubt this year the title will go down to the wire in Sin City again.

Scott Speed breaks his back in rallycross landing