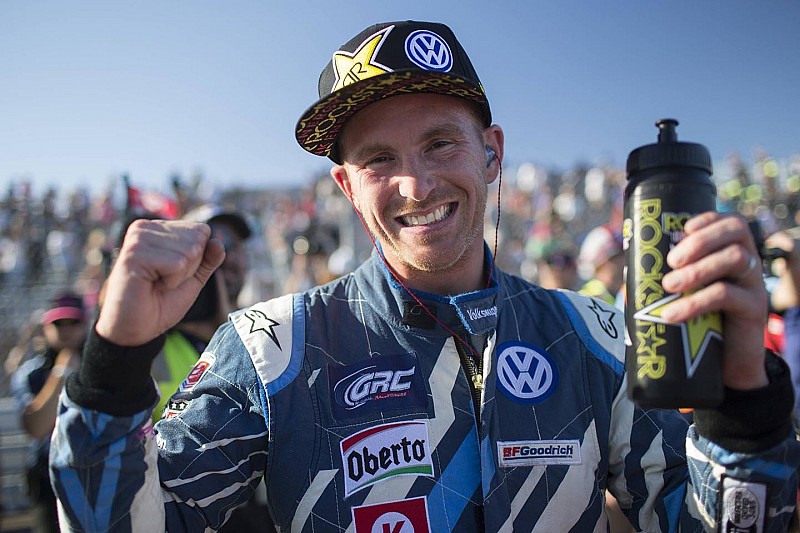 Scott Speed won the pole, multiple heat and semifinal races, and the main event in the 2017 season opener at Memphis International Raceway

Five drivers won heats under the brand new race format, which adds not only more heat races but also more points to the championship. Speed and Arpin won Friday’s first round heats, while it was Speed once again and Chris Atkinson who kicked off Saturday with second-round heat wins. Foust and Sebastian Eriksson won the third round heats, while the semifinals went to the VARX duo of Speed and Foust.

Contact on the first lap of the final ended Patrik Sandell’s day early, forcing a red flag and a restart. On the restart, Speed and Foust jumped out to first and second place, continuing their run as the class of the field from qualifying and the heat rounds.

But the podium wasn’t truly settled until the checkered flag fell, as multiple drivers held third place during the 10-lap final. Sebastian Eriksson had the spot initially after starting on the front row, but Mitchell deJong took the spot for most of the first half of the race. Arpin then used a well-timed Joker Lap at the halfway point to grab third for the remainder of the final.

A collection of facts from Saturday’s Red Bull Global Rallycross Memphis, the first round of the 2017 Red Bull GRC season:

·       Scott Speed earned the record 12th victory of his Red Bull Global Rallycross career on Saturday in Memphis. Speed became the first driver to win finals in each of the past five seasons. The win was also his record third in Red Bull GRC season openers (April 2013, Brazil; May 2014, Barbados).

·       Tanner Foust earned his first podium of the season, and the record 25th of his career, by placing second. His result also gave Volkswagen Andretti Rallycross its first 1-2 finish of the season, after taking three last year; the most recent came in Los Angeles last October, when Foust also finished second to Speed.

·       Steve Arpin earned his first podium of the season in the first race for Loenbro Motorsports. It was the second time that Arpin earned a podium in a Red Bull GRC season opener (May 2014, Barbados).

·       Mitchell deJong earned the best finish of his Supercar career by placing fourth on Saturday. deJong made his debut in the class in 2016 with two main event appearances.

Scott Speed, #41 Volkswagen Andretti Rallycross: “Everybody is working so hard. The first race when you come back is always the one you’re looking forward to. Almost everyone has done their homework, and you wonder who did the best job. I think it’s pretty clear. Our game plan is always the same: we focus on what we can control as a team and we do our job. If we do that, that’s all we can ask for. There are a lot of variables out there and you can’t control anybody. We just keep our head down and do what we do.”

Tanner Foust, #34 Volkswagen Andretti Rallycross: “It really is a tricky track. The first corner is so fast—when you dive in there, you wobble your way up the banking there. You really need to be inside on the second corner. Scott put up an amazing fight, and all you can do is go on those heels and game on. The points are much closer, and going into the final basically the points are similar for everybody. This track is awesome, the fans are awesome and there were so many people in the pits. It’s so great to come out here after a six-month season. It was great to reengineer and do everything that we possibly can to come out of here with a 1-2 finish.”

Steve Arpin, #00 Loenbro Motorsports: “This first one was tough. It was pretty good, but we had a tough weekend starting off. We pretty much missed both practice sessions, and I just completely blew it in qualifying. But our guys, they worked their tails off. No words can describe how good of people the Leach family is—to be able to work for them and put this race team together and build it, Loenbro Motorsports is an honor to work for. And with all the guys who came with us from last year, we have good and fast racecars. It’s going to be exciting, and we’ve got exciting things to come!”