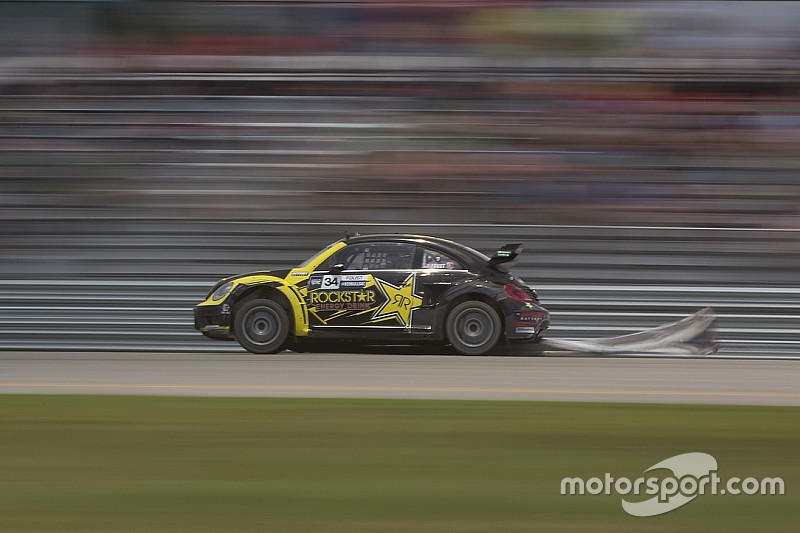 It was a warm and muggy day in the Bluegrass State for Red Bull Global Rallycross Round 2 practice, qualifying and heats.

For the second time in two races, a Volkswagen Andretti Rallycross driver posted the fastest time in Red Bull Global Rallycross qualifying during Saturday’s action in Louisville. But instead of Memphis polesitter Scott Speed, it was Tanner Foust who bested the .699-mile Kentucky Exposition Center layout in 29.908 seconds, holding off Speed and surging Subaru Rally Team USA driver Chris Atkinson for the pole.

“The Memphis race proved how important having a clean qualifying run is with the new format this season,” Foust said before the race. “This will keep all the teams pushing as hard as possible for maximum speed. With some momentum heading into Round 2, the Volkswagen Andretti Rallycross crew is working hard to maintain the high bar we set in Round 1!”

Speed and Atkinson came into qualifying with the two fastest times in practice, with Speed the only driver to break the 31-second barrier in the shakedown, while Foust, Patrik Sandell, and Sebastian Eriksson completed the top five. Speed’s lap of 30.474 held firm for most of qualifying, but just as he topped that lap, Foust posted an even faster one to crack 30 seconds for the first time.

Tanner Foust: “It was a crazy first day here in Louisville! I'm happy to qualify first, but this starting grid is one that having the pole is not necessarily the best thing. I made a mistake in the first heat and bogged down on the start. Then, I pushed a bit too close to a competitor going into a tight corner, with him slowing way down to be safe. Needless to say, I bumped him pretty good and took his position which resulted in a penalty. In the second heat, we had a better start from fourth, and made the repair work all worth it. We’re expecting some weather tonight, so all bets are off tomorrow morning. We’re bringing it!”

Scott Speed: “It was a tough day. I’ve been battling some type of illness this weekend, but I’ve had a lot of support from the Volkswagen Andretti Rallycross team to push through. My teammate Tanner [Foust] was a huge help in the support as well. Despite the tough day, our cars were crazy fast. The series made some regulation changes coming into Round 2 that I felt could’ve made today tougher for us. The starts and pace we had today showed how strong our teams are, and I think we really showed what we’re made of.”

A very close win for Sebastian Eriksson at GRC Louisville